Vatican, (SANA) – President Bashar al-Assad on Saturday sent a message to Pope Francis conveyed by Minister of State Joseph Sweid during his meeting with the Pope’s Secretary of State, Archbishop Pietro Parolin. 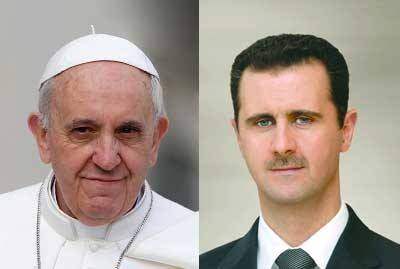 In the message, President al-Assad expressed the Syrian people and leadership’s appreciation of the stances of his holiness regarding the crisis in Syria, highlighting that the crisis will be solved through national dialogue among the Syrians and under a Syrian leadership without foreign intervention as to enable the Syrians to determine their future and leadership through ballots.

The message stressed the Syrian government’s readiness to participate in the international conference on Syria “Geneva 2,” highlighting that combating the terrorism that targets citizens is a decisive factor in making any peaceful solution to the crisis a success.

The message also highlighted that stopping terrorism requires having the countries which are involved in supporting the armed terrorist groups stop providing any sort of military, logistic or training support, noting that this support was provided by some of Syria’s neighbors and other known countries in the Middle East and abroad.

President al-Assad stressed the Syrian government’s keenness on carrying out its constitutional duty of protecting its citizens, regardless of their race and religion, from the crimes of the takfiri groups that target their homes, schools and places pf worship with terrorist bombings or arbitrary shelling.

During the meeting, Archbishop Parolin said his holiness is constantly following the situation in Syria and is deeply concerned over the suffering of the Syrian people, adding that Pope Francis affirms the need to solve the crisis in Syria through dialogue among the Syrians without foreign intervention.

Parolin relayed Pope Francis’ salutations to President al-Assad and his prayers for peace in Syria, the cradle of civilizations and religions.

The meeting was attended by the Vatican’s Secretary for Relations with States Archbishop Dominique Mamberti and Syria’s Assistant Foreign and Expatriates Minister Hussam Eddin Ela.

2 thoughts on “al-Assad sends a message to Pope Francis”