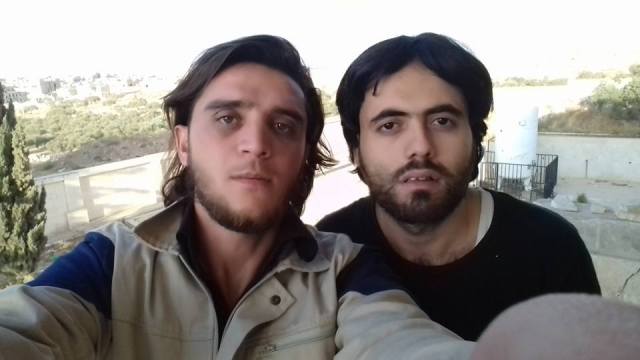 The well-known White Helmet and Jund-Al-Aqsa terrorist Muawiya Hassan Agha along with his terrorist accomplices were present at the site of the devastating bombing of civilians being evacuated from the Shiite villages of Fuah and Kafriya on April 15, 2017 as proven by his own acknowledgement. This fact was made known on his own Facebook page. ( Additional note – Facebook allows the terrorists in Syria free rein to promote themselves- many of their own posts show them leading a double life as both weapon carrying terrorists conducting atrocities and fake White Helmet humanitarian rescuers saving small children. Many of their postings include actual beheadings even though the posting of these horrific warcrimes is in clear violation of Facebook’s own posting policies, however, it seems Facebook continually allows this to go on unchecked. Many of the pictures attained by online terrorist trackers and researchers come from these unregulated Facebook pages.

Muawiya Hassan Agha states on his own Facebook page that he was present in the vicinity of the Rashideen at the time of the Bus bombing/massacre. 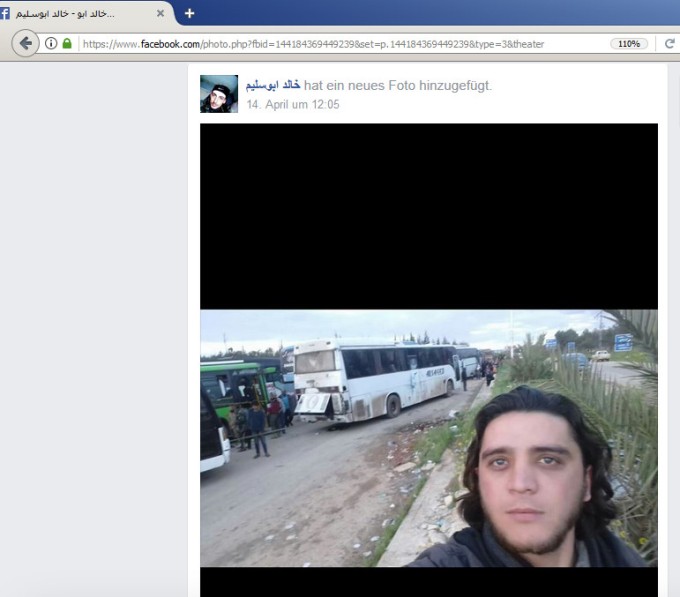 Muawiya Hassan Agha and his jihadists accomplices, who have appeared as White Helmets,  Jund Al Aqsa and Al Qaeda, should be among the primary suspects of the bombing attack in Rashideen. There is also the suspicion that this group is responsible not only for the bombing, but also for the subsequent abduction of numerous persons, most of them children, in terrorist controlled towns in the province of Idlib, and the exploitation of the chaos caused by the bombing that was intentionally misreported by western media outlets.

In the following photos we see Muawiya Hassan Agha conducting his regular terrorist activity and posting it to his Facebook page. 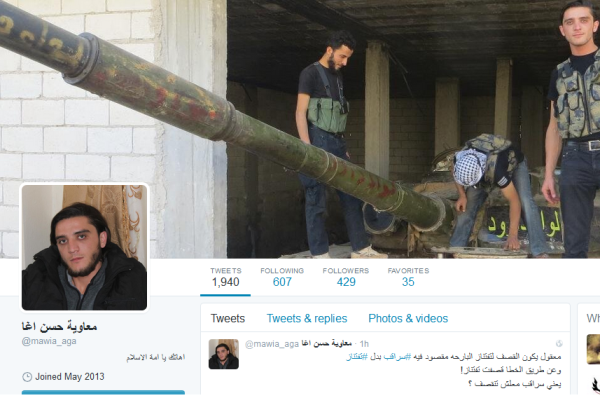 Here he is with captured Syrian soldiers who were tortured on camera and later executed, as proven below 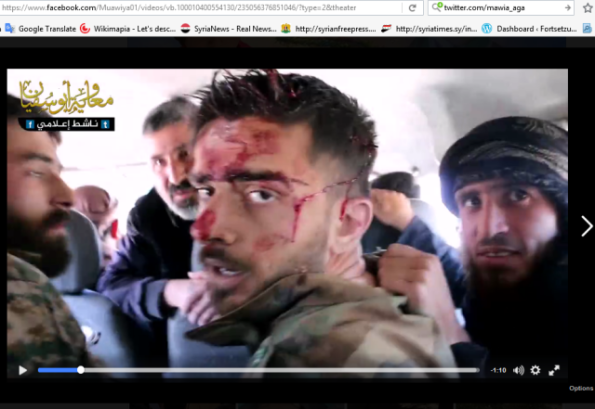 And here he is with his White Helmet accomplices….. 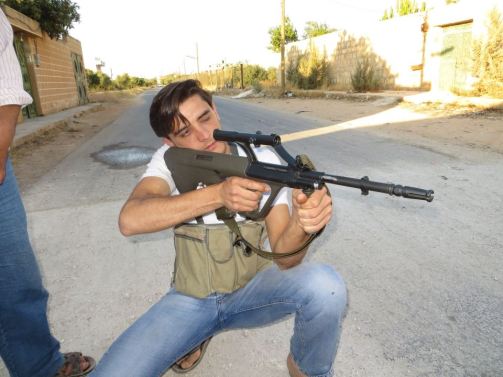 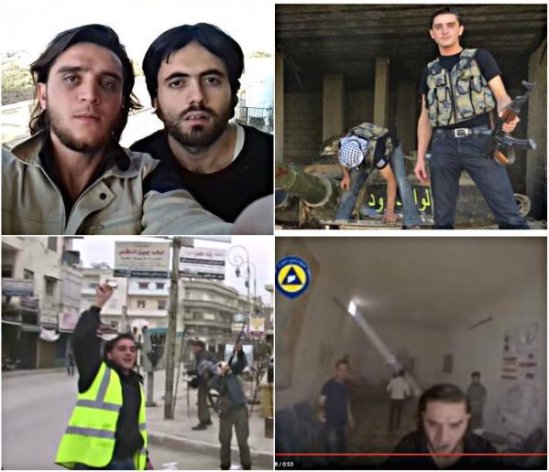 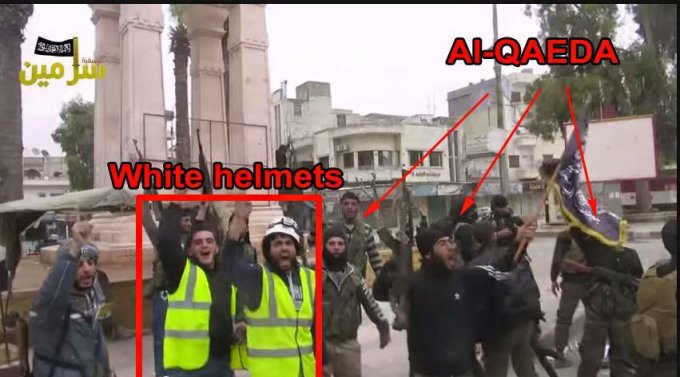 Judging from the photos above, plus the fact that Muawiya Hassan Agha admits on his Facebook page that he was present at the bus attack in Rashideen on April 15, 2017, it is quite disturbing that western media sources have ignored this important aspect of this incredibly tragic story. It seems that this terrorist is also being given a free pass when it comes to scrutiny related to the terrorist activities of the White Helmets. This is especially disturbing as children in terrorist besieged towns are continually being abducted, killed and used in false flag events carried out by the western supported terrorists in Syria while the US, UK, western and Gulf State media’s continue to be complicit in the cover up of these barbaric atrocities.

Robert Fisk, writing for the Independent, criticized Western governments for a double standard regarding the attack, contrasting their silence on the bombing with their reaction to the Khan Shaykhun chemical attack earlier in the month; he said that “after this weekend’s suicide bombing […] the White House said nothing […] because–and here’s the point–they were the victims of the wrong kind of killer.”

If Trump cares so much about Syrian babies, why is he not condemning the rebels who slaughtered children?

The question’s should be asked “Why are western media outlets completely ignoring the presence of this well known terrorist at the Rashideen Bus bombing that killed so many innocent people?” “Do the lives of these innocent children and families mean absolutely nothing to these corrupt western media outlets?” Of course, the question is purely rhetorical, but it should be asked nonetheless……..again and again…….. to expose the sociopaths and psychopaths who are complicit in the cover-up and false framing of this and other horrific false flag events related to the U.S., U.K., Israeli, Western and Gulf State regime change agenda in Syria.

A large amount of the information attained for this post is attributed to the following German WordPress site and has been translated and reuploaded here at CoS for English speaking audiences. Additional information can be obtained at the links below:

WhiteHelmetsEXP Terrorist Muawiya Agha Hassan boasts he was in #Rashideen at the time of the planned bombing!

This video shows what really took place as the children were being finally rescued by the Syrian government from the terrorist held towns. This is what you will not see on western television. Highly graphic warning.

Additional photos from the Facebook page of terrorist Muawiya Hassan Agha. (Note excessive use of children in the photos at his Facebook page mixed in with al-Qaeda propaganda, al-Nusra Front flags, photos of White Helmets and images of Bin Laden and other terrorists. Link to Facebook page. 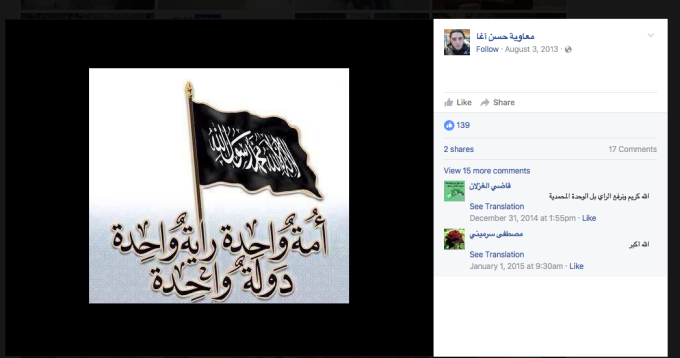