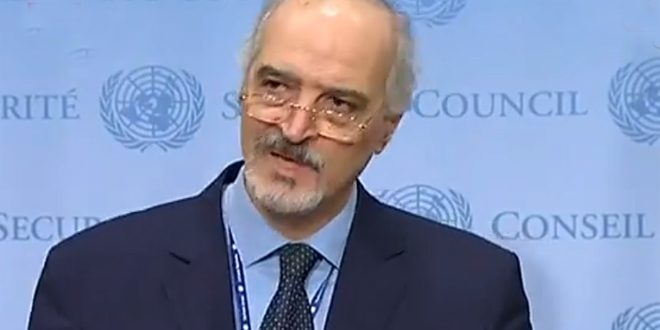 New York, SANA – Syria’s Permanent Representative at the UN Dr. Bashar al-Jaafari said that the statement of US President Donald Trump about Golan will not change the fact that it always was and always will be Syrian, stressing that the reckless US policies are the main factor in causing tension in the international arena and threatening peace and stability in the world.

During a press conference in New York on Friday, al-Jaafari said “in blatant violation of international law, the UN Charter and the most simple bases, values, and morals of international relations, US President Donald Trump tweeted yesterday about the occupied Syrian Golan, expressing his administration’s disdain for the international community and the UN which represents it, and the Security Council resolutions which formed for many decades the basis of international legitimacy.”

Al-Jaafari reiterated Syria’s strong condemnation of this irresponsible statement about the legal status of the occupied Syria Golan, which UN resolutions and Security Council resolution no. 397 of 1981 identity as occupied territory and state that any steps taken by the Israeli occupation authorities on these occupied territories are null, void, and without legal effect.

Syria’s Representative said the US administration has no right or jurisdiction to decide the fate of the occupied Syrian Golan, and any acknowledgement by it or any step that infringes upon Syria’s right to restore this occupied land is a hostile, provocative, and illegal act that has no effect, and this act undermines the commitments of the US as a permanent member of the Security Council and the host of the organization’s headquarters, in addition to violating the principles of international law, therefore the US is not qualified for its responsibilities as a permanent member of the Security Council.

Al-Jaafari said the statements by Trump and members of his administration about the occupied Syrian Golan, and the visits carried out by those who claim to represent the American people, will not change the fact that the Golan always was and always will be Syrian, asserting that the Syrians are more determined than ever to liberate this part of Syrian territory and return it to the homeland, regardless of whoever agrees or disagrees and no matter how much time it takes to achieve this.

“It has become clear to the international community that the US and its reckless policies are the main factor in causing tension in the international arena and threatening peace and stability in the world,” he said.

Al-Jaafari noted that current US foreign policy is bringing about an age of extremism in international political relations, returning humanity to the times of the law of the jungle and primitive ages when fire and its starters were held sacred, and it views humanity as fuel for its flames.

He said the current US administration has adopted a hostile methodology based on escalation with members of the UN, which is apparent in the nature of its relations with Syria, Russia, China, Europe, Iran, Mexico, Canada, Venezuela, and other states.

Al-Jaafari called upon the UN Security Council, the Security Council, and the General Assembly to condemn Trump’s statement and take the necessary steps to put a stop to American arrogance, ensure that international resolutions are respected, and preserve peace, security, and stability in the world.