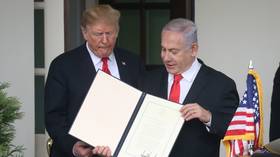 Donald Trump’s decision to recognise Israel’s annexation of the Syrian Golan has been met with condemnation by the international community, with the UN and Washington’s Gulf and European allies slamming the move.
The US president signed a declaration on Monday recognising Israel’s sovereignty over the disputed Golan Heights. Israeli Prime Minister Benjamin Netanyahu, who was present at the signing ceremony, praised Trump’s unilateral move, comparing the president to biblical and Zionist heroes. But reactions among the international community – including Washington’s closest Gulf and European allies – were considerably less enthusiastic.

The United Nations, which has long maintained that Israel’s occupation of the Golan is illegal under international law, signalled that its position had not changed. A UN spokesman said that Secretary-General Antonio Guterres will continue to honour a December 1981 resolution which called Israel’s annexation of the Golan Heights “null and void and without international legal effect.”

“It will have significant negative effects on the peace process in the Middle East and the security and stability of the region,“ a statement on Saudi Arabia’s state news agency SPA said. Saudi Parliament Speaker Mishaal bin Fahm al-Salami reaffirmed Riyadh’s “principled position” that the Golan Heights is Syrian land.

NATO ally Turkey also lashed out at Washington. Turkish Foreign Minister Mevlut Cavusoglu said that the US has “ignored international law” by recognising Israel’s sovereignty over the Golan Heights.

In a statement, Ottawa said that it “does not recognise permanent Israeli control over the Golan Heights.” 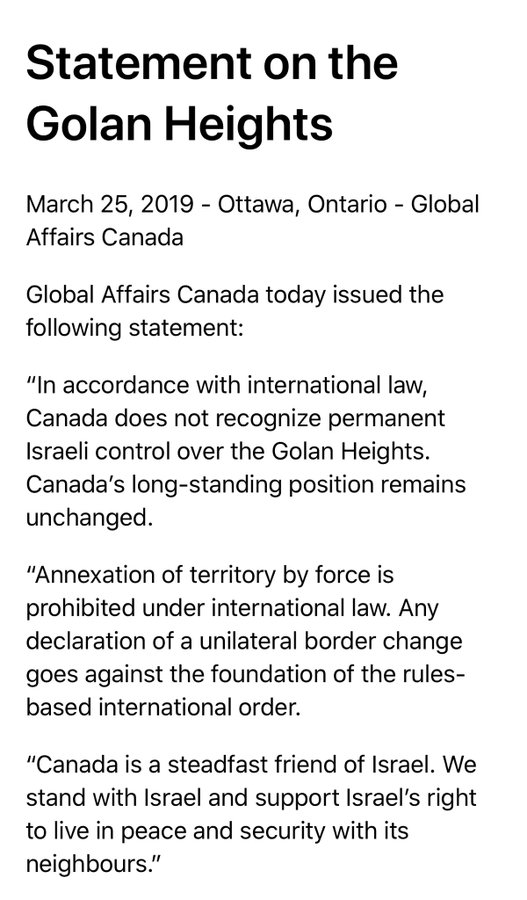 Australian Foreign Minister Marise Payne went so far as to take a subtle jab at US foreign policy.

“The Golan Heights is a matter for Israel and Syria to determine through negotiations in the context of a comprehensive peace settlement,” she said.

“US policy positions are a matter for the US government.”

Different, perhaps fence-sitting, statement from Australian FM Marise Payne:
“The Golan Heights is a matter for Israel and Syria to determine through negotiations in the context of a comprehensive peace settlement.”
“US policy positions are a matter for the US Government.”

“If national borders should be changed it must be done through peaceful means between all those involved,” a German government spokesman said.

The French Foreign Ministry tweeted about its opposition to the move, describing it as “contrary to international law.” 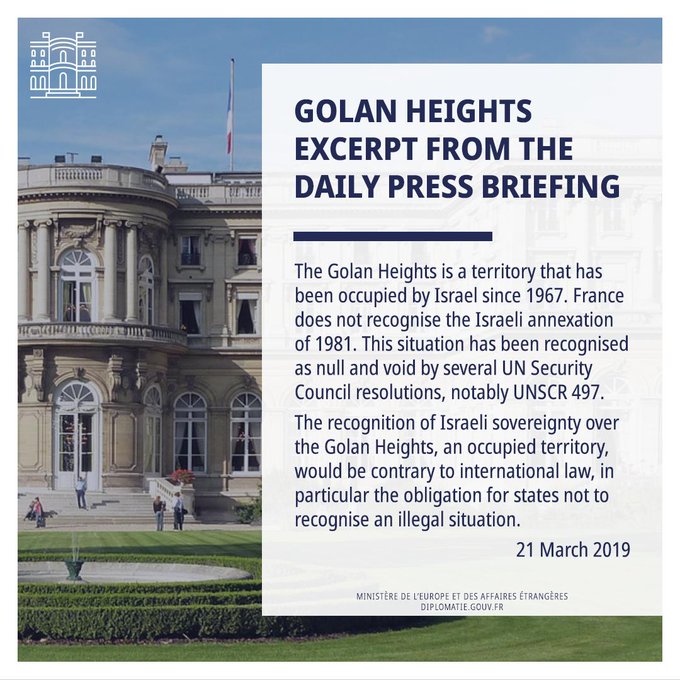 #GolanHeights: France does not recognise the Israeli annexation of 1981. The recognition of Israeli sovereignty over the Golan Heights, an occupied territory, would be contrary to international law.https://fdip.fr/8JsKytT0

Syria’s government said the decision was a “slap” to the international community, claiming that Trump’s Golan resolution makes Washington “the main enemy” of Arabs.

Following suit, Lebanon’s Foreign Ministry insisted the Golan Heights are “Syrian Arab” territory and that “no country can falsify history” by seizing land from another nation.

ALSO ON RT.COMUS backs Israel’s ‘sovereignty’ over Golan Heights, proving sovereignty is not something it respectsTehran expressed bafflement over Trump’s “unprecedented” move.

“No one could imagine that a person in America comes and gives land of a nation to another occupying country, against international laws and conventions… Such action is unprecedented in the current century,” Iranian President Hassan Rouhani was quoted as saying by state news agency IRNA. He added:

At a time when colonialism dominated, some colonial powers were doing these things and giving part of a country to another, but this is unprecedented in the current century

For its part, Moscow said that Trump’s decision marks yet another unilateral violation of international law.

“This decision will definitely have negative consequences both for the Middle East settlement process and the entire atmosphere in the Syrian political settlement. No one doubts this,” Kremlin spokesman Dmitry Peskov said.

ALSO ON RT.COM‘US decision on Golan Heights is highway to war’: Russian Duma speakerSimilar to Trump’s decision to recognise Jerusalem as the capital of Israel, his Golan resolution will likely face a vote in the UN General Assembly. Turkish President Recep Tayyip Erdogan has already promised to bring the issue before the international body.