US President Donald Trump holds up an executive order withdrawing the US signature on the international arms trade treaty (ATT), April 26, 2019 ©  Reuters/Leah Millis

US President Donald Trump has announced his administration will stop ratification of the UN Arms Trade Treaty (ATT) and withdraw from it, calling it “badly misguided” and a threat to American freedoms.

The UN will soon receive “formal notice that America is rejecting this treaty,” Trump said on Friday, speaking at the National Rifle Association (NRA) convention in Indianapolis, Indiana.

“I will sign right now, in front of a lot of witnesses, a message asking the Senate to discontinue the treaty ratification process, and to return the now-rejected treaty to me, to the Oval Office, where I will dispose of it.” 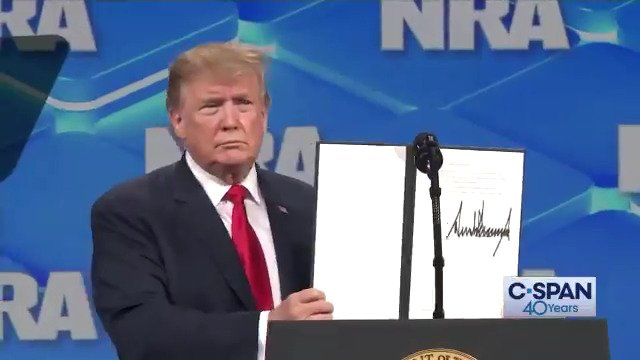 President Trump signs order to stop U.N. Arms Trade Treaty Ratification Process: “Under my administration we will never surrender American sovereignty to anyone. We will never allow foreign bureaucrats to trample on your Second Amendment freedom.”

227 people are talking about this

The ATT is a multilateral arms control agreement that regulates the international weapons trade. It was signed by US President Barack Obama in 2013, but never ratified by the Senate to become US law.

Conservative groups such as the NRA have voiced opposition to the treaty for years, arguing that its regulations seek to bypass the Second Amendment to the Constitution and impose domestic gun bans in the US.

The ATT’s stated goal is to “reduce human suffering caused by illegal and irresponsible arms transfers” and promote “accountability and transparency by state parties concerning transfers of conventional arms.”

While its proponents say the ATT does not impact a signatory state’s domestic gun control laws or firearms ownership policies, it does require members to “establish and maintain a national control system,” run by “competent national authorities.”

Some 130 countries have signed the treaty, and it is currently force in 100 of them, according to the UN.