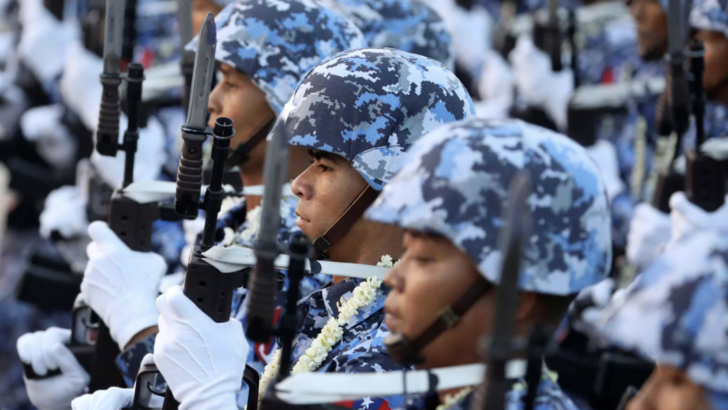 Two articles outline Israel’s economic ties to countries, including South Sudan and Myanmar, that are known for massacres and genocides. Israel’s High Court is complicit.

Israel has blood of 3 continents on its hands

weapons to countries that systematically violate human rights. Israeli-made weapons are also found in the hands of armies and organisations committing war crimes. The report points to eight such countries that have received arms from Israel in recent years.

Those countries in the report are South Sudan, Myanmar, the Philippines, Cameroon, Azerbaijan, Sri Lanka, Mexico and the United Arab Emirates. South Africa was also a trade partner during its Apartheid era. 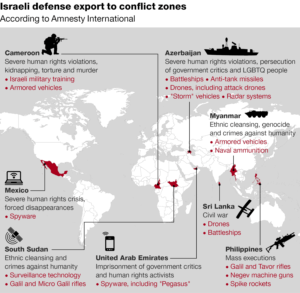 Israel signed (but never ratified) the 2014 Arms Trade Treaty. Amnesty International adds that “Israel has never acted in the spirit of this treaty, neither by legislation nor its policies.”

While pro-Israel organisations have often been critical of Amnesty International for allegedly “singling out” the Jewish State for censure, this rebuke names two additional culprits, stating that, because there are models for transparent reporting, “[t]here is no justification for the fact that Israel continues to belong to a dishonourable club of exporters such as China and Russia,” The Amnesty report states that

the South Sudanese army currently has Israeli Galil rifles, at a time when there is an international arms embargo on South Sudan, imposed by the UN Security Council, due to ethnic cleansing, as well as crimes against humanity, using rape as a method of war, and due to war crimes the army is perpetrating against the country’s citizens.”

According to Amnesty, the defence export control agency at the Defence Ministry approved the licenses awarded Israeli companies for selling weapons to these countries, even though it knew about the bad human rights situation there. It did this despite the risk that Israeli exports would be used to violate human rights and despite the embargo on arms sales imposed on some of these countries by the United States and the European Union, as well as other sanctions that were imposed by these countries or the United Nations.

In response to letters written to the export control agency, its head, Rachel Chen, said: “We can’t divulge whether we’re exporting to one of these countries, but we carefully examine the state of human rights in each country before approving export licenses for selling them weapons.” According to Amnesty, this claim is false, as shown by the example of the eight countries mentioned in the report.

According to one senior Israeli defence official, many of the claims in the Amnesty report have been brought as petitions to Israel’s High Court of Justice. However, in each case,

the court accepted the state’s position that deliberations would be held with only one side present – the state, and that its rulings would remain classified.

Jonathan Cook reported in 2017 that “Israeli courts have blocked access to documents that could shed light on what arms have gone to Myanmar,” a country condemned that year by the UN for conducting a “textbook ethnic cleansing” of the Rohingya minority. Israel has also been involved in training Myanmar’s special forces.

Israeli also sold arms to South Africa during the apartheid years; by 1986 it was the only Western nation not participating on sanctions against that country.

by Oren Ziv, reposted from +972Mag

Representatives of Myanmar’s military attended Israel’s largest, government-supported security and weapons conference in Tel Aviv on Tuesday. The officials arrived at the Tel Aviv Expo Centre for the International Defence, HLS & Cyber Expo, known as ISDEF, in full military gear. There they browsed through defence equipment and technologies produced by Israeli and international companies, alongside delegates of dozens more countries.

Top Myanmar army officials traveled to Israel in September 2015 for a “shopping spree” with Israeli weapons manufacturers. They also met with President Reuven Rivlin, the IDF chief of staff, as well as the head of the Defence Ministry’s International Defence Cooperation Directorate.

Israel supposedly stopped selling advanced weaponry to Myanmar in 2017 following petitions filed by human rights activists and attorney Eitay Mack to Israel’s High Court of Justice. Based on court hearings and statements made by Myanmar army officers, some of the arms that Israel has supplied include rifles, gunboats, and military training. The court has kept its ruling secret, however, and Israel does not allow any official publication of its arms trade with Myanmar.

According to the report produced by the UN’s Fact-Finding Mission on Myanmar, the military has committed massive violations against the Rohingya people, a Muslim minority group in the country, including gang rapes, forced disappearances, and the burning of hundreds of villages. Hundreds of thousands more displaced Rohingya civilians live in refugee camps in neighbouring Bangladesh. The report specifically names six senior commanders as most responsible for the human rights abuses, including the Tatmadaw Commander in Chief, Senior-General Min Aung Hlaing, who previously met with the Israeli army’s Chief of Staff on a visit to Israel.

According to the United Nations, the ongoing human rights atrocities committed by Myanmar’s military against the Rohingya people amount to crimes against humanity and genocide. The European Union extended an embargo on arm sales to Myanmar in April and UN officials have urged the international community to cut off all support for the country’s military. Israel has a history of selling weapons to dictatorships, among them the juntas in Argentina and Bolivia, Rwanda in the years leading up to the genocide, among others.

Also at the expo were representatives from South Sudan, including diplomat William Ador. Since 2013 the country has been torn by a civil war that has left nearly 400,000 dead and forced millions from their homes or to the brink of starvation. The two sides signed a new peace deal in September, although the fighting and human rights abuses continue. The U.S., EU, and UN Security Council have all imposed an arms embargo on the country.

Activists with Amnesty International, the Hamushim (“Armed” in Hebrew) Project, and the Israeli grassroots group Standing Together protested outside the conference venue. “We demand that Israel stop producing arms and surveillance equipment to countries that commit grave human rights violations,” said Chen Bril Egri, Amnesty’s head of campaigns for refugees and asylum seekers. “We explained to potential customers that the Israeli arms they are purchasing was used to commit genocide in Myanmar, ethnic cleansing in Sudan, extrajudicial killings in the Philippines, in addition to surveillance against regime resistors and human rights activists in Mexico and the UAE.”

“Israeli companies market their weapons and technology as tried and tested in the field, after they’ve used them in the West Bank and Gaza Strip at the expense of the lives and personal safety of Palestinians,” said Daniela Freund, an activist with Coalition of Women for Peace’s Hamushim Project, which seeks to expose the true human price of the Israeli arms industry. “Israeli arms exports has become a thriving business, and the weapons industry profits from the occupation,” she added.

Deputy Chief of Staff Maj. Gen. Yair Golan, who is viewed as a possible candidate for the leadership of the Labor Party, delivered the opening speech of the expo, saying that “we must examine in what ways modern means can improve our fighting ability based on lessons learned from the past.” In 2016, Golan raised controversy during a speech he delivered on Holocaust Remembrance Day when he said: “It is frightening to identify the horrifying processes among us that took place in Germany 70-80 years ago.”