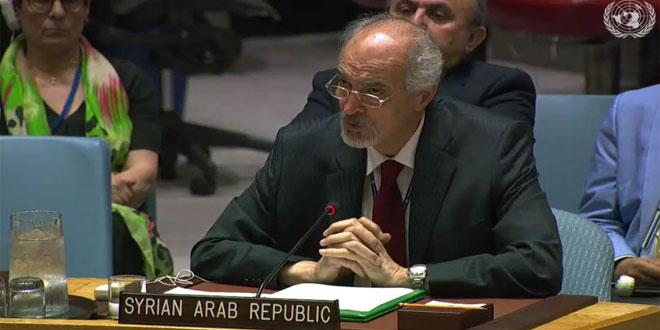 New York, SANA-Syria’s permanent representative to the UN, Dr. Bashar al-Jaafari said on Tuesday that the occupied Golan is an integral part of Syria and a right that can’t be prescribed , adding that liberating Golan and restoring it from the Israeli occupation, through all means which are guaranteed by the international law, is a priority for Syria.

“Israeli continued occupation of Arab lands represents the most dangerous challenge to the credibility and prestige of the international law’s rules and conventions,” al-Jaafari said at a session for UN Security council on the state in the Middle East.

He added that some states exploit the Security Council’s failure in putting its resolutions, relevant to ending the Israeli occupation, into effect, to work for reversing the realities and disavowing the legal obligations, and this was clear by Trump’s proclamation about the occupied Syrian Golan and Jerusalem, turning a blind eye to UN relevant resolutions, particularly No. 497 for 1981 which considered Israel’s measures in Golan as null and void.

“The Israeli occupation entity still launches attacks on Syria to offer support to the terrorist organizations, the latest of which caused the martyrdom of 4 civilians, among them a baby, and injured 21 others, the majority of them were women and children… in addition to the Israeli measures to loot the properties of the citizens in Golan to expand settlements, all are very dangerous acts,” al-Jaafari said.

He reiterated that Syria calls on the UN and Security Council to immediately move and force the Israeli occupation to set free Syrian captive Sidqi al-Maqt and all Syrian captives at the Israeli occupation prisons and put an end to its hostile practices and flagrant violations of international legitimacy resolutions, particularly No. 242, 338 and 497.

“Syria’s stance is firm and principled in support of the Palestinian people’s right of self-determination and the establishment of their independent state with Jerusalem as its capital and the Palestinian refugees’ right to return home according to resolution No.194 for 1948,” al-Jaafari added.

1 thought on “Al-Jaafari: Liberating Golan from the Israeli occupation is priority”