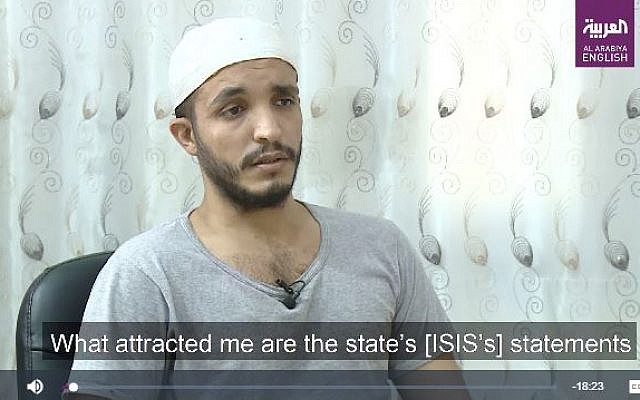 Sayyaf Sharif Daoud, an Arab Israeli who traveled to Syria to join IS, speaks with Al Arabiya. (video screenshot)

An Israeli citizen captured in Syria while fighting with the Islamic State terror group asked to return home this week, telling news outlet Al Arabiya that he wants Prime Minister Benjamin Netanyahu to repatriate him.

In an interview with the network broadcast Wednesday, Sayyaf Sharif Daoud beseeched the premier to work to bring him back, noting Israel’s policy of making deals to return soldiers captured by the country’s enemies.

“I am an Israeli citizen. I know you are the prime minister of a democratic state that does not differentiate between Jews and Arabs,” Daoud said at the end of his interview, switching from Arabic to Hebrew.

“Many countries removed their citizens from here. Everyone knows what you did for one Israeli soldier, your country is large and scary,” Daoud said, presumably referring to the deal made to return Gilad Shalit, who was held in Gaza for five years before being released in 2011 as part of a controversial deal with Hamas in which Israel freed over 1,000 Palestinian security prisoners.

“I request that you return me to Israel. It is very hard, this jail. It is very, very hard. This is my request and I know it is not hard for you to do. And by god I promise to not go back to how I used to be and to become a respectable person,” Daoud added. 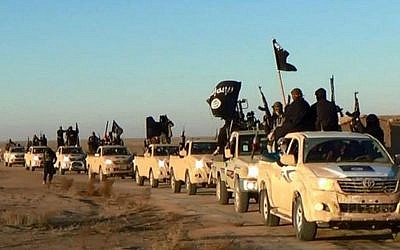 In this undated file photo released online in the summer of 2014, terrorists of the Islamic State group hold up their weapons and wave its flags on their vehicles in a convoy on a road leading to Iraq, in Raqqa, Syria. (Militant photo via AP, File)

Captured in Deir Ezzor, the 30-year old Israeli citizen claimed that he had not participated in war crimes, serving instead as a nurse.

He told Al Arabiya that at one point IS had imprisoned him because he was Israeli.

“Any person I have any problems with, could go to the security forces and tell them that I’m Israeli. I would get imprisoned immediately,” he said.

“Imagine, after three years of being in the state, they imprison you and tell you ‘you’re Israeli,’” Daoud continued. “I used to feel ashamed of calling it [a state] that’s following the prophet’s steps. They wanted to record my voice speaking against Israel [but I did not] want to cause Israel or [my] family any trouble.”

“Many of us, not only me, were opposed to the slaughtering style. There are children, there are pregnant women,” he said, denying any role in the mass killings perpetrated by the terror group. “I founded a rescue team to help the injured from strikes. Whenever there was a strike, I’d be there.”

Asked if he had been armed, he replied “I carried a gun. Every person in the state, whether they’re a nurse, or working in the oil field, they need to carry a gun.” 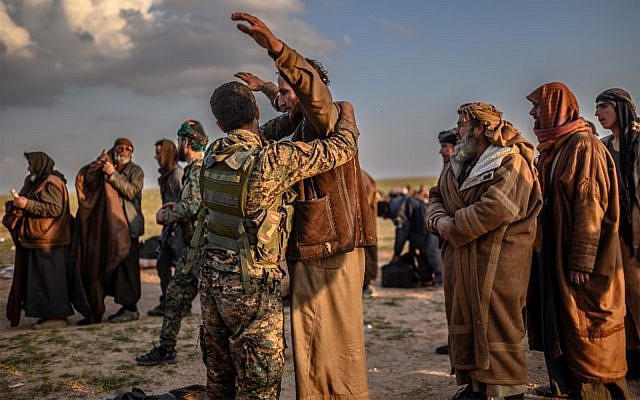 In a previous interview with BBC Arabic that was translated by the Middle East Media Research Institute (MEMRI), Daoud praised Israel, explaining why he chose to join Islamic State rather than any of the Palestinian terrorist organizations.

“I lived through the Second Intifada. I have seen war. I lived in the West Bank and in Israel. Israel has not done one percent of what Bashar Al-Assad has done,” he said, referring to Syria’s president. “There was fighting and all that, but Israel has not raped women or stripped them naked on TV, and it has not killed with such barbarity.”

Noting that his father had warned him against Hamas and Fatah, Daoud said that “Israel is a democratic state. I have not seen injustice there. We Arabs live together in Israel with the Jews. There is no injustice. We are treated just like the Jews.”

Daoud apologized to his parents, saying in Hebrew that he had “made a big mistake” and was sorry for the problems he had caused them.

“I know that my mother thinks of me every day and she is angry and that is very difficult for me because I always think of her.”

Foreign volunteers from around the world have served with Islamic State and many have requested to be allowed to return home. Australia recently moved to bar the return of Islamic State supporters who are demanding to be repatriated from crowded refugee camps in Syria.

In April, Interior Minister Aryeh Deri moved to strip an Israeli man of his citizenship for traveling to Syria to join Islamic State six years ago. Deri instructed ministry officials to take action in absentia against Abdallah Hajleh at the recommendation of the Shin Bet security service. The revocation must be approved by a special citizenship court. According to reports in Hebrew-language media, Hajleh has a citizenship in a second country.

The Shin Bet security service has in the past estimated that several dozen Israeli nationals had fought for IS in Iraq and Syria. Most were either killed in action or returned to Israel, where they were arrested.