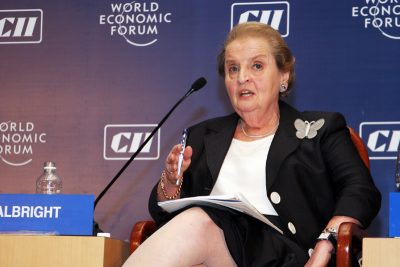 “To see others suffer does one good, to make others suffer even more: this is a hard saying but an ancient, mighty, human, all-too-human principle [….] Without cruelty there is no festival.”  — Friedrich Nietzsche, On the Genealogy of Morals / Ecce Homo

Why do powerful governments revel in their ability to cause human suffering in order to bring about a desired political change? The West, led by the United States, has become the initiator and prosecutor of purposeful pain and suffering, and is continuing to advance policies that breed anguish and hardship against the innocent in many countries. These innocent, many of them children, are left starving, left without medical care, and are forced to live in fear due to the horrible conditions placed on them by the western world.

Much of this agony is due to brutal economic sanctions being levied against those countries that do not bow down to the hegemony known as the U.S. The ruling elites are boastful in their support for these harsh policies, as what they claim to seek from these atrocious sanctions is regime change or major policy change by extreme force. But is that the entire story, or do they also find joy in the festival of causing harm to the people of countries they claim as enemies? Do they secretly gain pleasure from this planned cruelty? It seems evident that those implementing this suffering do take satisfaction in their ability to cause pain in order to gain power.

The idea of sanctions has become the norm. It is even anticipated and desired by not only the political class, but by many in the general population as well. Why is this so? Is it due to false beliefs? Is it because the propagandized masses fear that without these sanctions, other countries might rise up to be aggressors threatening our “national security?” Is it because by destroying others economically, Americans believe they will be more prosperous? Does the average person really believe that sanctions will prevent these countries from attaining weapons of mass destruction? Or do many in the general populace also take pleasure in witnessing human suffering at the hands of their rulers?

There are a few pretend dissenters in the mainstream media, and even some in the alternative media, who talk out of both sides of their mouths about this issue. While some claim to expose the brutality of these economic sanctions, they in many cases give cover to the narrative by using the excuse that these sanctions are not effective in bringing about regime change. If they were effective in causing regime change, would that then make this strategy moral or right? How can an aggressive act of war like that of forcing sanctions on an entire country or region, ever be warranted because it might affect regime change?

Many of these so-called defenders of human rights also claim that even though sanctions are levied with “good intentions,” the results are not positive. How can deliberately starving entire populations, depriving them of medical care, destroying their means of economic survival, and generally decimating their lives, have ever been considered a good intention?

It is useful to understand language, as what people say and write should not be taken lightly, it should be scrutinized and studied. In most cases, people will eventually say what they really mean, and many will either speak with a forked tongue, or fashion their position using a double-edged sword. Excusing heinous behavior by suggesting it was only heinous because it did not achieve a certain goal, is not only a weak argument, it is completely immoral. This is a very common way to take both sides of an issue, while falsely claiming the high ground. In other words, it is a lie.

The truth about economic sanctions is that they are abhorrent. It is the intentional use of power and control by governments to purposely brutalize an entire population of innocent men, women, and children, in order to advance a political agenda. This is the definition of terrorism. It is done without compassion or caring for the mass suffering that will always result. It is a knowingly planned destruction of entire societies, which can only lead to the mass suffering of innocent people. It is unholy.

The United States, with the help of its complicit allies, is now sanctioning countries around the world. Some of the more brutal situations are occurring in Iran, Venezuela, North Korea, Cuba, several countries in Africa, Syria, Yemen, and many others of course. The people of Venezuela have been persecuted by U.S. sanctions, and are literally starving in the streets. Iran’s economy is in dire condition, as horrendous economic sanctions are being enforced there.

This is all being done with the full knowledge that many millions of people will suffer terrible consequences. There is malnutrition, starvation, sickness, disease, lack of medical care, lack of medicine, and in many cases families are forced to abandon their homes and country. This is strictly due to the outside pressure of sanctions and aggressive war. This is true cruelty, but the attitudes of the ruling elite and political class are only consumed by indifference. This is what they desire; this is what they seek.

How can anyone ever forget the ice-cold words of Madeleine Albright when she was Secretary of state under Bill Clinton, as Iraq was suffering under barbarous sanctions? Over 500,000 children under the age of 5 died due to those sanctions, and they died horrible deaths. On national television, the question asked by Lesley Stahl and answered by Albright in a very calm, calculated, and matter of fact manner was this:

“Lesley Stahl on U.S. sanctions against Iraq: We have heard that a half million children have died. I mean, that’s more children than died in Hiroshima. And, you know, is the price worth it?

Secretary of State Madeleine Albright: I think this is a very hard choice, but the price-we think is worth it.”

The current face of deliberate U.S. terrorism is steeped in economic sanctions that cause massive human suffering. Sanctions are acts of war, and when committed by U.S. power brokers against so many innocents around the world, they are terrorist acts. These economic sanctions are cold, heartless, and evil, and can only lead to the total destruction of what little is left of human decency and compassion in this fallen country called America.

2 thoughts on “U.S. Sanctions Are Meant to Cause Deliberate Human Suffering”