is an Irish freelance writer based in Dublin. Her work has appeared in Salon, The Nation, Rethinking Russia, teleSUR, RBTH, The Calvert Journal and others. Follow her on Twitter @DanielleRyanJ 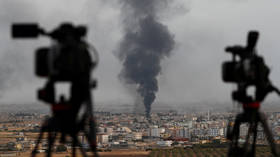 Mainstream US media has been the biggest cheerleader for Washington’s chaos production in Syria for years, but now, as Donald Trump pulls troops out of the northeast, they’re suddenly outraged. Spare us the crocodile tears.

“Plenty of reason here for the US possibly to become involved,” pleaded a horrified MSNBC correspondent this week, chastising Trump for ignoring “war crimes” and “human rights abuses” by Turkish forces. 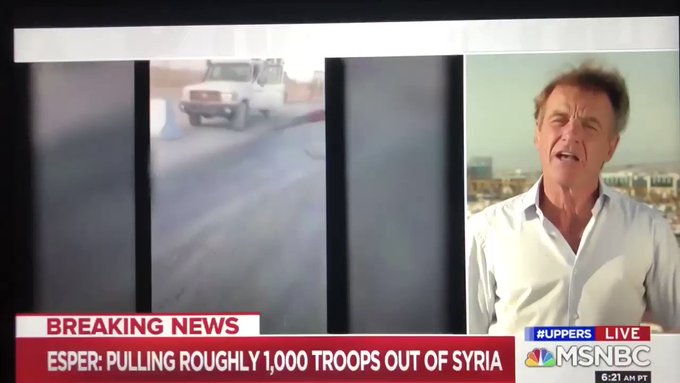 701 people are talking about this

Yet, while he and others cloak their demands for continued US military action in humanitarian concern for the Kurds in the face of Ankara’s onslaught, there is a more selfish reason for the media outrage. They are profoundly addicted to the bogus narrative of the US as the world’s savior, and worse, they crave the kind of dramatic TV footage and tales of military heroism that US forever wars offer. If that sounds a bit too cynical, recall MSNBC anchor Brian Williams close to weeping as he shared the “beautiful pictures” of American missiles raining down on Syria two years ago.

ALSO ON RT.COMTurkish police detain nearly 200 for social media posts opposing military op in SyriaThe pleas for fresh US intervention also reveal a hyper-focus on Washington’s “image” in the eyes of the world. The media has been bleating for days about how Trump’s actions will be perceived by its allies and enemies, but who is going to break it to them that their “image” is not quite what they think it is?

Successive US administrations have pursued policies of chaos and disarray in Syria for years; first covertly attempting to sow social discontent to spur and exploit a popular uprising, then by funding, training, and backing jihadist militias (Al Qaeda, included) against Bashar Assad’s army, and prioritizing the fall of his secular government over peace for the better part of a decade.

Couple that with Washington’s continued facilitation of slaughter in Yemen, its penchant for economically choking uncooperative nations with punitive and deadly sanctions and its psychological warfare of constant threats of violence against Iran, and one wonders exactly what kind of benevolent do-gooder image there is left to salvage.

This uniquely American obsession with image on the world stage was on display during CNN’s Tuesday night Democratic presidential debate, too. The perpetually grandstanding Cory Booker claimed Trump had turned America’s “moral leadership” into a “dumpster fire,” while Pete Buttigieg lamented the president’s betrayal of American “values” that left the country’s reputation and credibility “in tatters.”

ALSO ON RT.COMTurkish invasion creates better conditions for Islamic State terrorists as it creates chaos, Assad’s key adviser tells RTJoe Biden, who as Obama’s former VP, shares plenty of the blame for the state of Syria today, called Trump’s pullout from northern Syria “the most shameful thing that any president has done in modern history” in terms of foreign policy. Iraqis might disagree with that statement, but remember, all pre-Trump foreign policy disasters have been conveniently flushed down the memory hole and their perpetrators rehabilitated for the purposes of comparison with the evil Orange Man.

The hand-wringing over America’s image betrays a deeply delusional but long-ingrained belief that the world at large sees the US military as a force for good. In reality, worldwide polls have shown that the US is actually regarded as the greatest threat to world peace, not — as news anchors and Washington politicians would have you believe — a facilitator of world peace.

Tulsi Gabbard was the only candidate on the Ohio debate stage willing to call a spade a spade, describing the chaos in northeast Syria as “another negative consequence” of US involvement in the region.

“Donald Trump has the blood of the Kurds on his hands, but so do many of the politicians in our country, from both parties, who have supported this ongoing regime change war in Syria, along with many in the mainstream media, who have been championing and cheerleading” it, she continued. 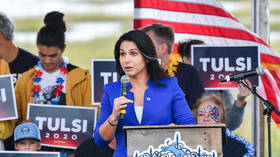 ‘How is there NO question?’ EVEN CNN hosts gasp at guest’s claim that Tulsi Gabbard is ‘a Russian puppet’ (VIDEO)

She slammed the US’s “draconian sanctions” on Syria, describing them as “a modern-day siege the likes of which we are seeing Saudi Arabia wage against Yemen” and promised that if she was the president, she would end support for Al Qaeda in Syria, which she said had been the US’s “groundforce” in the war.

Cue the gasps all around.

Gabbard’s insistence on forcing a reckoning with the reality of US policy in Syria makes her presence on the debate stage so necessary, but predictably her input, while entirely truthful, was met with spineless attacks in the same vein as those she has been subjected to from mainstream media for months, culminating recently with a McCarthyist hit-piece published by the New York Times implying that she is a Russian asset.

Reaction to Gabbard from journalists watching on social media was just as fierce. MSNBC’s Clint Watts called the notion of US support for Al Qaeda a “falsehood” that needed challenging. Watts, it turns out, part-authored a 2014 piece for Foreign Affairs about Ahrar al-Sham, an Al Qaeda-linked group “worth befriending.” Another reporter called Gabbard’s claims about the US arming Al Qaeda a “Russian talking point.” Investigative journalist Max Blumenthal quickly responded with a photograph of Al Qaeda firing a US-supplied TOW missile in Aleppo.

It is a fact that the Russian talking point for years has been that the United States arms al-Qaeda in Syria. Tulsi Gabbard just said it on national television.

This is from a video published by HTS (Al Qaeda in Syria) showing one of its fighters firing a US-supplied TOW missile in West Aleppo. The CIA-backed FSA was a weapons farm for Al Qaeda and ISIS. That’s not a “Russian talking point.” It’s a fact. https://thegrayzone.com/2019/05/31/us-missiles-al-qaeda-turkey-syria-idlib/ … 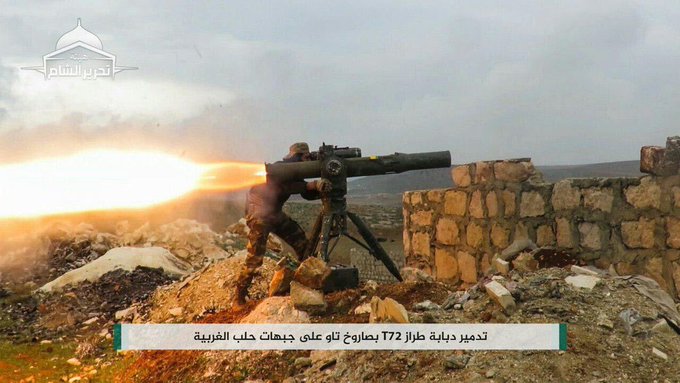 But to the regime change fanatics and war cheerleaders, these facts don’t seem to carry much weight. Narrative has always been more important.