In an intensifying situation which could mean major war between two state powers is on the horizon, Syrian state news agency SANA has reported “heavy” ongoing clashes between the Syrian Army and Turkish forces since Sunday. Turkish authorities also confirmed the clashes on Wednesday.

Fighting has centred around the northern Syrian town of Ras al-Ayn on the border with Turkey, which initially broke out last last week, resulting multiple reported deaths of Syrian troops, according to Reuters. At least six Syrian military personnel were reported killed by Turkish fire on Tuesday.

Underscoring the reality of a crowded battlefield with multiple actors, from which US forces just partially extricated themselves, both pro-Assad and Syrian Kurdish forces have come under Turkish attack. There’s also been fighting reported around Manbij.

Turkey’s military has accused the Kurdish YPG of launching attacks on its forces using mortars, drones and light weapons, which has resulted in at least five Turkish soldiers wounded.

This is what the ceasefire in North Syria looks like today.

Civilians in Tal Tamer which is controlled by SDF/ Syrian army are fleeing.

There is fear that Turkey & its Syrian proxies are heading from Ras al-Ayn in southern direction towards Tal Tamer. 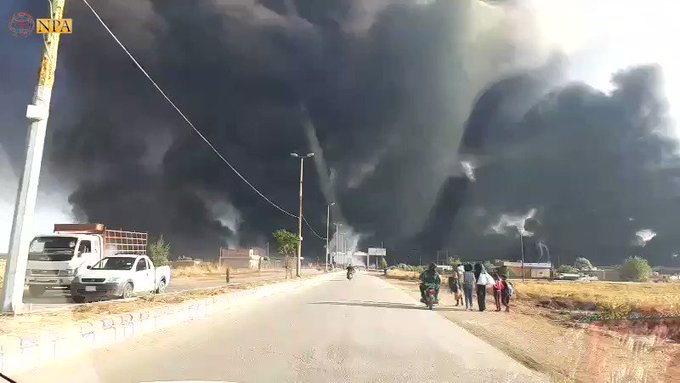 935 people are talking about this

Clashes at Ras al-Ayn illustrate the scramble to secure territory by each side in the wake of US withdrawal from the border area — Kurdish YPG forces hold the town under Turkish assault, while Syrian troops have reportedly been invited in with agreement of Kurdish forces.

Meanwhile, on Wednesday Turkey’s vice president condemned the passage of a US House resolution and a bill passed in the US House the day prior, saying it’s “against the spirit of the Syria agreement” brokered with Mike Pence and backed by the White House.

The House voted overwhelmingly to pass a resolution recognising the Armenian genocide which began in 1915, an extremely sensitive issue for Turkey, as well as to pass new biting economic sanctions over its Syria incursion – the latter which Trump is expected to reject.