Kilicdaroglu: Erdogan’s policies towards Syria , the region have failed 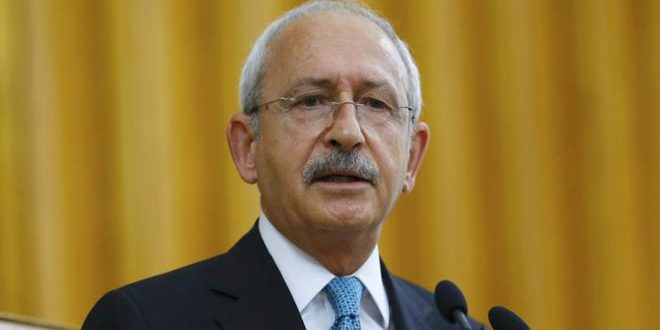 Ankara, SANA- Chairman of the Republican People’s Party (CHP) Kemal Kilicdaroglu affirmed that the policies of the President of the Turkish Regime Recep Tayyip Erdogan towards Syria and the Middle East in general have failed because he hasn’t adopted national policies, but he has been usually serving the interests of Washington in framework of the “Greater Middle East” project.

In a statement to journalists in Ankara, Kilicdaroglu said “Erdogan along with the US, Saudi Arabia and Qatar have interfered in Syria under the pretext of democracy, yet they have supported the terrorist groups which have destroyed Syria and forced hundreds of the Syrians to leave their homes,” affirming that these policies have proven their failure on the tactical and strategic levels.

Kilicdaroglu asserted that solving the problems between Syria and Turkey entails a direct coordination and cooperation with the Syrian government with all of its legitimate institutions.