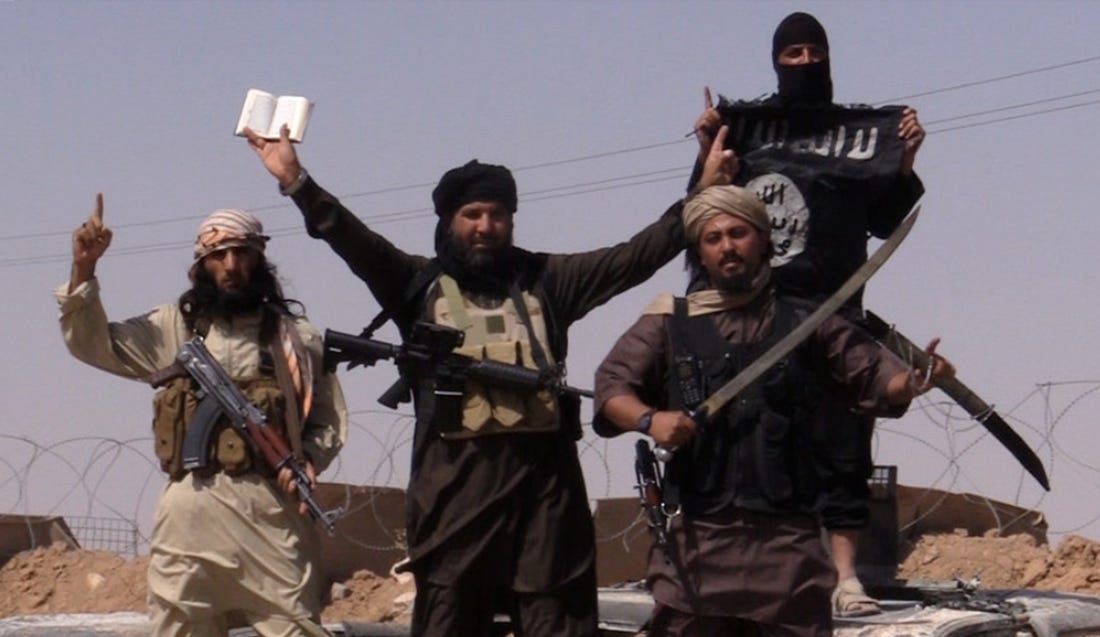 Turkey is deporting terrorists to their country of origin. President Recep Tayyip Erdoğan said Tuesday, “Some countries have started panicking after we began the repatriation process of foreign Daesh terrorists. Turkey has been worrying about this issue for years, let others worry now,” He added, “The American Daesh terrorists stranded in the buffer zone on Greece border is none of Turkey’s concern, deportations will continue regardless.”

The Turkish Interior Minister, Süleyman Soylu, said last week that Ankara would start sending ISIS terrorists back to their country of origin even if they had been stripped of their citizenship, adding that Turkey was not a ‘hotel’ for foreign jihadists.  “There is no need to try to escape from it; we will send them back to you. Deal with them how you want,” said Soylu.

Turkey has criticized Western countries for refusing to take back their citizens who were members of ISIS, also known as Daesh, and stripping them of their citizenship, although the 1961 New York Convention made it illegal to leave people stateless. Since 2010, the UK has stripped more than 100 people of British citizenship. One of the first deported terrorists was an American, unnamed, who was deported to the USA via Greece.  However, he refused to go into Greece, and returned to Turkey, upon which the Turks refused him re-entry and pushed him back to Greece.  Finally, when he asked to enter Greece, they refused which has left him in ‘limbo’ in a buffer space between Turkey and Greece.  The US State Department acknowledges they are aware of the situation but offer no further details about the man who has been photographed and was shown on Turkish TV.

Plans to deport eleven French citizens and seven Germans, along with three from Denmark and two from Ireland, were forming, according to Turkish Interior Ministry spokesman Ismail Catakli. A spokesman for the German Foreign Ministry, Christofer Burger, announced in Berlin that ten people were to be deported to Germany suspected of ISIS involvement, including women and children.  The Germans were due to be flown home on November 14th.

Erdogan will meet with Trump today at the White House.  Erdogan will present documentation that Ferhat Abdi Sahin, who is known to the US military as ‘General’ Mazloum Kobani, is a PKK terrorist.  Recently, Trump spoke with Mazloum, who is the military leader of the Syrian Democratic Forces (SDF), and spoke highly of Mazloum and had invited him to the White House.  Trump ordered the withdrawal of US troops from northeastern Turkey, which paved the road for Erdogan to order an invasion on October 9th, to remove the SDF. The US military partnered with the SDF in the fight to defeat ISIS in Syria.  However, the fight was over and Trump had promised his citizens to ‘bring the troops home’.  Many felt this was a betrayal of the SDF, who had fought and died in the fight to stop ISIS, alongside US troops.  However, Erdogan views the SDF, and Mazloum, as part of the internationally recognised terrorist group, PKK, who has waged a terror campaign against Turkey for more than 30 years, resulting in the deaths of nearly 40,000 people, including women, children, and infants.

Not every terrorist is being deported from Turkey, only the ones they don’t want.  The mercenary militia Free Syrian Army (FSA) is on the Turkish government payroll and fighting inside Syria today on behalf of Erdogan.

The ground troops used in ‘Operation Spring Peace’ are Syrian terrorists who are now mercenary soldiers employed by Turkey.  We first heard of the FSA in 2011 when Obama and Sen. John McCain called them ‘freedom fighters’ and funded them through covert CIA programs, as well as through Congressional funding, lobbied by McCain and others.  McCain made a personal trip to meet with the FSA near Idlib and the photos his office posted online were controversial. The FSA ended up a failure in Syria, while their ‘brother’s in arms’, Al Qaeda, arrived and were successful, with the FSA either switching uniforms to Al Qaeda or their ‘brother’ ISIS.  Erdogan continued to support them as the remnants of the FSA re-grouped in Turkey, and he rebranded them as the “Syrian National Army”; however, the new name never stuck and they are still called FSA.

Since the FSA have invaded northeast Syria, about 200,000 people have been displaced, according to the UN. Families are scattered across the area, and it is the FSA who are blamed for beatings, rapes, looting, kidnappings, and executions.

The FSA invokes the name of God in every action they take.  If they kill innocent civilians or armed SDF soldiers, they do so by invoking the name of God.  Their shouts of “Allahu Akbar” are remembered from their first appearance in 2011 in Homs, when the carried banners which read, “Christians to Beirut, Alowis to the grave.”  They were followers of the Muslim Brotherhood ideology which gave them the Islamic authority to slaughter in the name of God and to judge who is a ‘heathen’ or not.

“Those people are filled with hatred and a lust for blood,” said Fateh, a barber from Ras al-Ayn.  “They do not distinguish between Arab and Kurdish, Muslim and non-Muslim. They contacted me before the offensive and said that as an Arab Muslim, it is my duty to rise up against the Kurds and help Turkey invade my city.”  He refused and left the area.

“Someone called me and simply said ‘we want your head’ as if stealing my home and driving me out of my city merely for being Kurdish was not enough.” said Mohammad Aref, a radiologist from Tal Abyad.  He said he was reminded of how ISIS acted when they invaded his town in 2013.  The FSA terrorists “destroyed a lion stonework at the entrance of our building, thinking it was idolatry”, he said. “They took our carpets and threw them on the street to prostrate themselves on them during public prayers that they were holding.”

“Let’s be clear, Tal Abyad is not under the control of Turkey. It’s under the control of Turkey’s mercenaries.  They have taken over the houses of us Kurds and made them their own.  Each one of those mercenaries acts as if he was in charge of the town.  They walk into houses and proclaim them theirs. They kidnap and execute people for being ‘atheists’ or ‘blasphemers’. And they are looting people’s properties in broad daylight.” said Mikael Mohammad, the Kurdish owner of a clothing shop in Tal Abyad.

The FSA terrorists “believe that taking your life is doing God’s work and that stealing your property is their reward for it,” said a Kurdish aid worker from Ras al-Ayn, now displaced in Qamishli.

Graphic videos uploaded by the FSA showed them executing captives along a highway near Tal Abyad.  On October 12th the Syrian Kurdish politician, Hevrin Khalaf, was tortured, murdered and dismembered after the FSA ambushed her car.  The videos of her body and the mutilations of the corpse went viral online.  Her mother said after receiving the body for burial, the only thing she could recognize was a portion of her chin.

Speaking to journalists recently, Erdogan defended his Syrian allies, saying they were not “terrorists” but Islamic holy warriors who were “defending their land there, hand in hand, arm in arm, shoulder to shoulder with my soldiers”.

In 2012, Daniel Wagner, the author of “Virtual Terror”, wrote about the FSA, at a time when the Obama administration and the US media were supporting the FSA regardless of the war crimes and atrocities they were committing. He wrote, “The West should not be surprised if an Islamic state results from an FSA victory.”  That was written seven years ago, while Turkey today, a US ally and NATO member, is using the same terrorists to murder in northeast Syria, and there is no international outcry, as they had all supported them before. Interestingly, the only international outcry is that their terrorists are coming home to roost.

1 thought on “Western terrorists are coming home to roost”