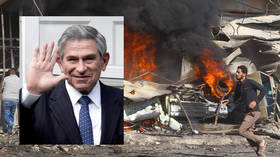 © Reuters / Aboud Hamam (inset: Reuters / Yuri Gripas)
Unreconstructed neocon Paul Wolfowitz has slammed President Donald Trump for ‘abandoning’ the Kurds, insisting the US will need them next time there’s a war in Syria. Trump’s blunder, then, is thinking wars can “end.”

The man once described by CNN as “the heart and soul of the Iraq war” points out in an op-ed in the New York Times on Thursday that decades of meddling in the Middle East have made the US some friends in the region – namely, the Kurds. Casting them aside, he says, will make future meddling much more difficult.

When the next war comes around – and Wolfowitz assures us there will be a next war – the US will be sorry it spurned its Kurdish friends, he warns. The inveterate warmonger calls Trump short-sighted for viewing all engagement in the Middle East through the lens of the Iraq and Afghanistan quagmires, and holds up a failed Shiite uprising against Iraqi leader Saddam Hussein as a cautionary tale of what happens when the US isn’t lurking in the shadows ready to play World Police at the drop of a shell – but glosses over the fact that every war Wolfowitz has backed in his lengthy career has ended with the “liberated” country all but turned to dust.The failed war’s mastermind reminds Trump that because the US’ Kurdish and Arab allies were gracious enough to serve as cannon fodder in the fight against the Islamic State (IS, formerly ISIS/ISIL) in Syria and Iraq, the US lost just six soldiers, compared to 11,000 from the US-backed opposition. A less belligerent mind might see this as exploitation, rather than alliance – but friendship means never having to say “sorry I turned your homeland into a hotbed of sectarian conflict.”

In Wolfowitz’s view, there is no “right” way to leave a war. “Walking away from [the Middle East] has a way of sucking America back in,” he warns – as if the power vacuum he warns will develop in the absence of a firm American hand to guide backward local politicos is an actual literal vacuum, capable of sucking American troops through space. The only way to prevent this is to prop up US “allies” at the helm of these countries and surround them with American “advisers” so they don’t make the mistake of listening to their people.

Wolfowitz admitted in 2013 that the Iraq War was a disaster, but insisted this was only because he wasn’t actually its “architect,” all CNN plaudits aside – he had wanted Iraqi leadership from the start, rather than the embarrassingly colonialist look of having American “viceroy” Paul Bremer running the show.  Americans would still be behind the scenes pulling the strings, however – he has bemoaned the lack of “leadership qualities” in Iraqi politicians as recently as 2017, insisting the US must maintain a presence in the country to keep it from “going to hell literally.” For a man who spends so much time mouthing platitudes about democracy, he is wildly allergic to self-rule by Middle Eastern peoples. Had the Bush Administration simply done things according to his plan – adopted the properly colonialist model of backing one group of Iraqis against the others – everything would have been peachy.But even as he warns against allowing power vacuums to develop, he tears into former President Barack Obama for not backing the Syrian opposition’s efforts to overthrow President Bashar al-Assad, lamenting that a bit of support in the right place could have “toppled the regime…with little risk to Americans.” Apparently, some power vacuums are more dangerous than others.

That complete lack of insight has made Wolfowitz one of the loudest cheerleaders for any and all wars since his tenure. He was a big fan of invading Libya, and wrote an op-ed in the Wall Street Journal begging Trump to bomb Syria (which Trump did). It’s astonishing that any serious politician still listens to the man who infamously promised in 2003 that the Iraqi people “would greet [American troops] as liberators,” obviating the need for a heavy troop presence in the country. Trump’s repeated attempts at leaving Syria have all crumbled in the face of opposition from the entrenched interests that Wolfowitz represents. But if he stops even trying to pull Americans out of the region, Wolfowitz will be right – these wars will keep happening.