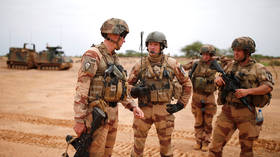 There’s no major difference between supporting terrorism on Syrian soil and sending troops there without formal approval from its government, Bashar Assad said as he lambasted France’s role in Syria’s civil war.

Syria has “come a long way” toward defeating much of the terrorist insurgency on its soil, but pockets of resistance still remain as jihadists are receiving support from Turkey and Western countries, Bashar Assad told Paris Match magazine, singling out the US, the UK and “especially France.”

France has joined the US-led anti-Islamic State (IS, formerly ISIS) coalition, providing air support and deploying special forces to Syria. But for Assad, the French intervention amounted to an “occupation,” as Paris – like its major NATO ally Washington – failed to secure Damascus’ authorisation of the mission.

Do you frankly think that we can send Syrian forces to fight terrorism in France without being invited by the French government? International law governs the behaviour of states in the world, not [their] intentions.

Now, when foreign forces came to Syria without being invited by the legitimate government, “it is [called] occupation,” the Syrian president insisted, adding, “there is not a big difference between supporting terrorism and deploying the military to occupy a country.”

Dubbed Operation Chammal, the French deployment was, officially, to carry out reconnaissance flights and aid Kurdish and Arab fighters in Syria. At peak times, France’s assets in the Middle East included a Charles de Gaulle carrier strike group, a fighter jet squadron as well as several marine units on the ground.

The interview came on the back of the Syrian army’s advances in the northern province of Idlib. The troops are now trying to fight their way toward the last militant-held towns along the strategic Damascus-Aleppo highway.

ALSO ON RT.COMBritain and France will send forces to Syria …but Americans will pay for it, report suggestsAs the fighting continues, Assad said Syria can handle the war without any backing from the West. “We can manage our own business … But we want to come back to a world order that is no longer respected, because chaos reigns,” he concluded.