Tulsi Gabbard in New Hampshire on Tuesday. The lawsuit reads: ‘Tulsi has suffered significant actual damages that are estimated to exceed $50m – and continue to this day.’ Photograph: Kristopher Radder/AP

The Hawaii congresswoman and Democratic presidential candidate Tulsi Gabbard is suing Hillary Clinton for defamation, alleging the 2016 nominee described her as a “Russian asset” and claiming more than $50m in damages. 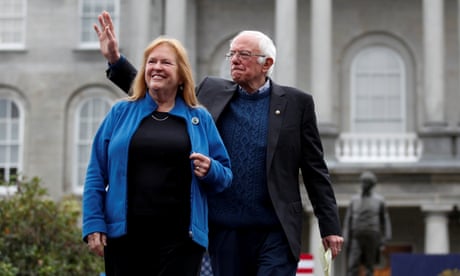 Sanders on Clinton’s ‘nobody likes him’ claim: ‘On a good day, my wife likes me’

Gabbard, who sued Google in July 2019, also claiming $50m, filed the lawsuitin the southern district of New York. She claims that in October 2019 Clinton “falsely stated” that Gabbard “is a ‘Russian asset’”.

“Clinton’s false assertions were made in a deliberate attempt to derail Tulsi’s presidential campaign,” the filing says.

Gabbard’s allegations stem from an interview Clinton conducted with the Democratic strategist, author and podcaster David Plouffe in October 2019. Discussing the 2020 primary field, Clinton said of one candidate: “She is a favourite of the Russians.

“They have a bunch of sites and bots and other ways of supporting her so far. And, that’s assuming Jill Stein [the Green Party nominee for president in 2016, who received favourable coverage from Russian state media] will give it up, which she might not because she’s also a Russian asset. Yeah, she’s a Russian asset.”

Some observers say Stein cost Clinton victory over Donald Trump in key states in 2016. Such claims are fiercely debated.

A Clinton spokesman confirmed that Clinton was talking about Gabbard.

Before the interview, the New York Times reported that Gabbard had “supportive signs” from the Russian state news media, and said a hashtag supporting her “appeared to be amplified by a coordinated network of bot-like accounts”. The Times said there was no evidence of coordination between these networks and Gabbard’s campaign.

Gabbard claimed Clinton had said she was being “groomed” by the Russians. Though a number of media organisations did report that Clinton made that accusation, media factcheckers discredited Gabbard’s interpretation of Clinton’s statement about Russia, with the Washington Post awarding her three “Pinocchios”.

Gabbard’s lawsuit brushes over the “grooming” claim, focusing instead on the alleged damage of the “Russian asset” remark.

“Tulsi is not a Russian asset,” the filing says. “No one – Russia or anyone else – controls her or her presidential campaign.”

Joe Biden used to be a progressive Democrat. What happened?

The lawsuit claims Clinton made the remark in “retribution” for Gabbard supporting Bernie Sanders in the 2016 primary and describes Clinton as a “cut-throat politician” who has “never forgotten this perceived slight”.

At the time, Gabbard was in her second term in the House and was a vice-chair of the Democratic National Committee.

Gabbard sued Google in 2019, claiming the company suspended her campaign’s advertising after the first Democratic debate in June. A hearing is reportedly set for 27 January.

There is little evidence Clinton’s comments have had any impact on Gabbard’s popularity. According to Real Clear Politics, the congresswoman was polling at 2.3% nationally at the time of the remarks. She currently has 1.7% of stated preferences.