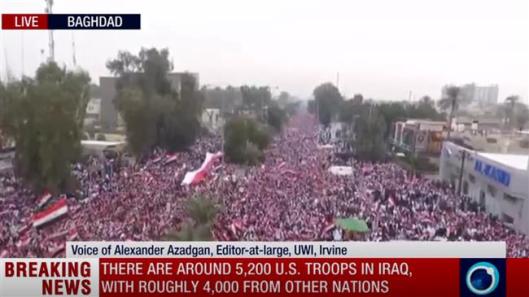 Hundreds of thousands of Iraqis are protesting against continued US presence in their country – Baghdad is over 6000 miles from Washington DC btw.

After Trump’s reckless and stupid assassination of Iran’s General Soleimani – who was no terrorist, he was fighting terrorists just to let you know – and Abu Mahdi al-Muhandis the Iraqi Deputy Commander of the Popular Mobilization Units that have been fighting ISIS – the you know what hit the fan.

But that murder, against all international laws and our our own laws, was just the most recent US crime committed in Iraq.

Secretary of State Mike Pompeo who brags and laughs about being trained in the CIA to lie, steal, and cheat said the US has been a force for good in Iraq.

Why do they want us out? We killed their country in our war sold with pure lies. At least a million have died as a result and over 10 million were displaced. We incubated ISIS in our Camp Bucca prison system. We were sadistically torturing the people in our Abu Ghraib prison. The birth defects from our weapons used in Fallujah and radiation around our bases have poisoned the new generation there. We stole their historic treasures. We destroyed their heritage seed bank and pressure them to buy Monsanto and other mega corporation seeds. We deliberately fostered sectarian hatred. We tried to steal their oil. We killed Christianity there – almost all Christians have gone. The brain drain has been horrific for the society – a huge percentage of the professors, doctors, scientists are gone. To name just a few and yes, I have proof of all this.

Donald Trump thinks Iraq should pay for the privilege of being destroyed by our war of lies and terror against them and that we should just take their oil. So much for his reported “instincts” of wanting to get us out of these wars; I’m not buying what he’s been selling. I will happily admit I’m wrong when I actually see something rational from him but I have little hope since his administration is stocked with neocon liars and his personal, endless pandering to Israeli ambitions of expansionism.

The majority of the Iraqi parliament, the current Prime Minister, and now a huge turnout of Iraqis are demanding the US leave.

So, will the US get out of Iraq? Or will we insist on an eternal belligerent and unwanted occupation? Will we encourage ISIS to re-surge there to provide another fake justification for remaining? And yes, we’ve done that before also in Syria and Iraq.

1 thought on “Demonstration Against US Presence in Iraq”