U.S. officials have now made clear that if U.S. forces become removed from Iraq as Iraq’s Parliament unanimously demanded and Iraq’s Prime Minister affirmed on January 5th, then the U.S. will try to break Iraq up into separate Sunni and Shia nations, and will also definitely impose sanctions against Iraq or (if Iraq becomes successfully broken up) against the Shia-governed portion of Iraq, in order to destroy Iraq (or the Shiite regions in Iraq) totally.

The U.S. is determined to separate both Lebanon and Syria (both of which are supported by Shia Iran) from Iran so that Iran will become internationally isolated unless and until Iran again becomes controlled by the U.S. Government as it was during the period from 1953 when U.S. imposed the Shah’s dictatorship there, till 1979, when Iranians finally took back control over their country and kicked out the U.S.-and-allied foreign oil companies.

By far the best international journalism about the situation today regarding Iraq has come from the Middle East Eye, which headlined on January 23rd, “US seeking to carve out Sunni state as its influence in Iraq wanes”, and sub-headed, “With Shia parties pressuring American troops to leave, Washington wants to create an autonomous region around Anbar to maintain its presence.” Their reporter in Baghdad, Suadad al-Salhy, stated that,

Backed into a corner and influence waning, the United States has in recent weeks been promoting a plan to create an autonomous Sunni region in western Iraq, officials from both countries told Middle East Eye.

The US efforts, the officials say, come in response to Shia Iraqi parties’ attempts to expel American troops from their country.

Iraq represents a strategic land bridge between Iran and its allies in Syria, Lebanon and Palestine.

Establishing a US-controlled Sunni buffer zone in western Iraq would deprive Iran of using land routes into Syria and prevent it from reaching the eastern shores of the Mediterranean.

For Washington, the idea of carving out a Sunni region dates back to a 2007 proposition by Joe Biden, who is now vying to be the Democratic Party’s presidential candidate. …

“The creation of a Sunni region has always been an option for the US. The Iranians cannot be allowed to reach the Mediterranean Sea or benefit from the land bridge connecting them to Hezbollah” in Lebanon, the former US official told MEE.

“The project is American, not Sunni. The presence of the American forces has been the guarantor for the Sunnis and the Kurds, so if the US has to leave Iraq, then establishing a Sunni region in western Iraq is its plan to curb Iran and its arms in the Middle East,” he added.

“We are talking about establishing a country, not an administrative region.” …

The Arab Gulf states allied to US, led by Saudi Arabia and the United Arab Emirates, support and finance this project, Sunni and Shia leaders and officials told MEE.

“Funding is in place, international pressure is in place, and the necessary military strength is in place to create this region,” a prominent Sunni leader familiar with the talks said.

“Neither Iran nor the Shia forces will be able to stand against the project because the US and Gulf states back it,” the leader added.

“A huge amount of money and investment offered by the Sunni states is at stake, and these will turn the Anbar desert into green oases and rebuild the destroyed areas in Mosul and Salah al-Din. Who will care about oil?”

This is a war by U.S., Saudi Arabia, the other Arab oil monarchies, and Israel, against Iran, and it will become also a U.S.-v.-Russia war unless Russia complies with America’s demand to stay out, and not to defend Iran.

Anbar Province is one of two places where the fanatical Sunni ISIS was located in Iraq, the other being the city of Mosul directly to the north of Anbar. Both areas are so heavily Sunni so that in order for Iraq’s mainly Shiite government to become able to wage an effective war against ISIS in Iraq, it first had to convince Anbar’s residents that this would be something which would benefit all of Iraq and not only Shiites in Iraq. Fallujah and Ramadi, two cities where Iraq’s Government were especially trying to defeat ISIS   in 2014, are in Anbar Province. Until 2015, Iranian General Soleimani’s forces (all of them Shiites) were virtually the only effective forces trying to exterminate ISIS; and therefore, Iraq’s Government had to emphasize that killing ISIS was a patriotic, not a sectarian, matter. On 17 September 2016 U.S. President Obama bombed Syria’s army in the heart of Syria’s oil-producing region, the city Deir Ezzor, for Syria’s ISIS to move in and take Syria’s oil. During October through December 2016, two of Syria’s main enemies, Obama, and Turkey’s leader Erdogan, established a system to reinforce ISIS in Deir Ezzor, by supplying them ISIS fighters fleeiing from Mosul in Iraq’s north. On 11 December 2016, I headlined “Obama & Erdogan Move ISIS from Iraq to Syria, to Weaken Assad”, and reported that the U.S. and Turkey were offering a deal to fighters for ISIS in Mosul, a way to stay alive but not in Iraq. They would relocate west into Syria, so as to assist the U.S. and its allies to overthrow, or at least seize territory from, Syria’s Government. America’s war against Syria used basically three proxy-forces as boots-on-the-ground: Al Qaeda, ISIS, and Kurds — all three being Sunnis. The Sauds provided most of the funding for it, because the goal was to place Syria under the control of the Sauds. And the U.S. sticks by that goal. No matter how much the people in Syria oppose it. It’s not only Trump who is obsessed with this goal; Obama was, though he wasn’t as obsessed with destroying Iran as Trump is.

On January 24th, Middle East Eye’s Washington reporter Ali Harb headlined “At what point do US troops in Iraq become an occupation force?” and he took the most literalist approach possible to this question, in which the obvious answer should be “as soon as we invaded and occupied the country on 20 March 2003.” He got an answer from the U.S. Government, saying that “diplomatic notes, which are not public, remain the legal basis for the presence of about 5,000 American soldiers in Iraq today” and that “the letters contain a provision that gives US forces one year to withdraw after they are formally asked by Baghdad to leave.” So: if this U.S. Government, which has become infamous for violating its contracts (such as the Iran nuclear agreement and the Paris Climate Agreement), alleges that it can stay in Iraq for another year and yet still remain within the bounds of those “diplomatic notes, which are not public” — and which a supplicant Iraqi Government had allegedly consented to in 2014 — then Iraq’s Government will need to wait until 5 January 2021 before accusing the U.S. Government of violating that secret and coerced “1-year cancellation clause.” And, if Iraq’s Government is, at that time, still insisting that U.S. terminate its occupation of Iraq, then, Joe Biden’s 2007 plan will start being implemented, to break Iraq into its Shiite Arab southeast (friendly toward Iran), Sunni Kurd northeast (backed by U.S.), and Sunni Arab southwestern desert half of Iraq’s expanse (hostile toward Iran). There would be no more land-connection between Iran to Iraq’s east and Syria to Iraq’s west. For Iran, that would be like cutting off its two arms. Furthermore, Ali Harb noted that the Obama-Trump Administrations’ Pentagon official Brett McGurk said that “If the U.S. leaves Iraq, it means NATO, 20 western partners also leave.” McGurk was suggesting that Iraq without U.S. would become then again a U.S. enemy. The U.S. regime is determined to destroy, one by one, each country that tries to block U.S.-and-allied billionaires from taking them over. Here are two maps of Iraq, which show what trisecting Iraq would mean: 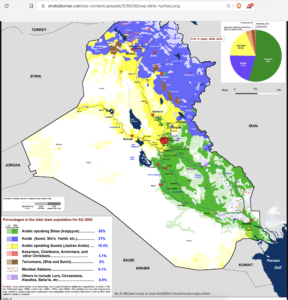 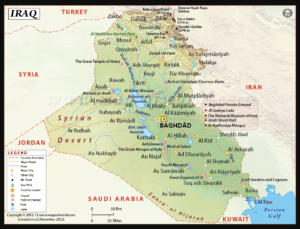 So: Syria would be surrounded by U.S. allies.

According to MEE’s Suadad al-Salhy in Baghdad,

Leaders familiar with the ongoing talks on partitioning Iraq said that Sunni politicians are seriously involved in the discussions and are waiting to see the demonstrations’ outcome before deciding on their path.

“The meetings are taking place in full swing, and all the Sunni leaders are attending. But they deny this publicly, waiting for the conditions that protect them,” a prominent Sunni leader familiar with the talks told MEE.

If the protesters are able to force through a national government that takes care of all Iraqi communities, then the Sunnis will reject any planned autonomous area, the leader said.

Failure to achieve this, he warned, would see Sunnis supporting the partition project en masse.

“Sunnis do not want to be part of the Shia crescent, and refuse to submit to Iranian control. So they will offer the Americans permission to build military bases in their lands, in exchange for the necessary support to establish the desired region.”

“We’re not at a point where the US and Iraq are enemies,” said Abbas Kadhim, director of the Iraq Initiative at the Atlantic Center think-tank in Washington. …

Kadhim, of the Atlantic Council, called for negotiating an American military withdrawal from Iraq in a way that would ease the tensions of the past few weeks and preserve the strategic partnership between Washington and Baghdad. …

Kadhim said the “knee-jerk reactions” that Baghdad and Washington have been displaying are not helpful.

“At the end of the day, the United States cannot impose its troops on Iraq. There’s no justification for keeping troops in Iraq against the will of the Iraqi people, and it’s not in the interest of the United States to do that,” he told MEE. …

The US envoy for the Coalition against IS, James Jeffery, … also issued an implicit warning to Baghdad on Thursday [Jan. 23].

At a news conference, he said that if the US and Iraq were to negotiate a troop withdrawal, everything else would be on the table, including Washington’s diplomatic support to Baghdad.

“We’re not interested in sitting down and talking only about withdrawal,” Jeffery said.

“Any conversations that the Iraqis want to have with us about the United States in Iraq, we believe should and must cover the entire gamut of our relationship, which goes way beyond our forces, goes way beyond security.”

Kadhim said imposing sanctions on Iraq would be harmful to both nations and counterproductive to Washington’s stated aim of reducing Iranian influence in Baghdad.