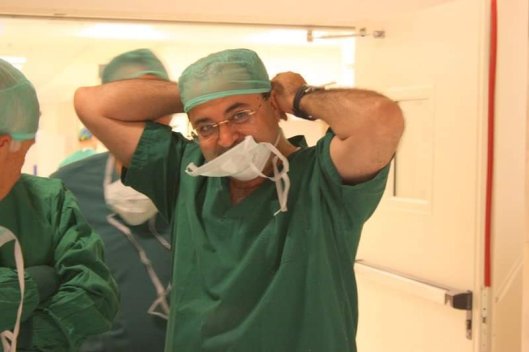 The global Coronavirus epidemic is bringing about radical measures from various countries. Israel has 157 infection cases counted at the time of writing.

The epidemic, which is unprecedented in the history of the state, also caught Israel at a time of a protracted political impasse. The failure to form a government has so far resulted in three elections within less than a year. Benjamin Netanyahu’s right-wing bloc is just short of the 61-seat majority with 58 seats. The center-left bloc in principle has a 62-seat majority, but that would include the 15 seats of the Joint List (representing mostly Palestinian Israelis) as an external support. So the center-left would create a “minority government” where the Joint List wasn’t actually part. Although it seemed close, hopes were recently dashed by internal dissent – not only from the right-flank of the opposition party, Blue and White, but also from the left Labor-Gesher-Meretz alliance.

But if internal mechanisms can’t bring about a government, essentially because of Jewish-Zionist racism, then maybe the Coronavirus could help. After all, extreme times call for extreme measures, right? The only question is how extreme it can get.

As Israel upped its anti-Coronavirus tactics Thursday, closing down schools and universities, Prime Minister Benjamin Netanyahu and rival leader Benny Gantz were reported to be considering a broad unity government joining the two biggest parties, Likud and Blue-White– a prospect that earlier appeared impossible, as Gantz had vowed not to serve under a Prime Minister facing indictment for corruption. Netanyahu’s court case has been set to begin this coming Tuesday.

In an address to the nation, Netanyahu said that the Coronavirus outbreak meant that “all of humanity is in the same boat”. And on that basis, he called for a unity government. “It would be an emergency government for a limited time, and we will fight together to save the lives of tens of thousands of citizens,” he said. Netanyahu has reportedly invited Gantz to meet on this basis. Gantz for his part spoke of a “broad unity government”:

In a conversation I had with him after [his address], I told him that we would continue to back every move [aimed at preventing the spread of coronavirus in Israel] and I suggested that our negotiating teams meet and discuss the need and possibility of establishing a broad emergency government for the forthcoming period.

But Gantz said that Netanyahu was only “addressing me via the media, as usual”:

So far I have not received a serious reply from him. I am still waiting — because an emergency government is the right thing for the State of Israel at this time.

Gantz insisted that the broad emergency government include elements from all political sides – and that means also the Joint List.

But the Joint List means “untouchables” for Likud. Netanyahu’s response:

Terror supporters cannot be part of the government — not in regular times or in an emergency.

The “terror supporter” rhetoric has been a standard for Likud, as a smear of the Palestinian politicians. 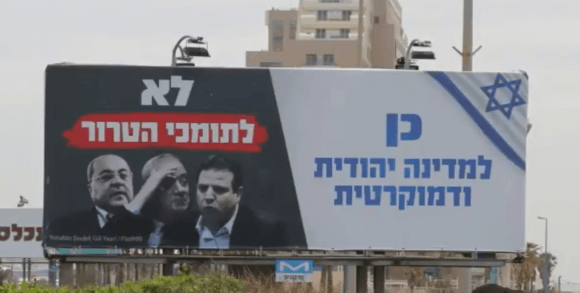 Of course when it’s Jewish terrorism, it’s a whole other story. Netanyahu can easily embrace Itamar Ben Gvir of Jewish Power party, though the man hangs a photo in his home of Baruch Goldstein, the Kahanist Jewish terrorist who massacred 29 Palestinian worshippers in 1994. That’s not a problem. “Terror” is just a Likud euphemism for “Arabs”, and it’s never “us”. Not even the pre-state Irgun which bombed the King David Hotel in 1946. No, they were “freedom fighters” for Netanyahu. Netanyahu’s father was a private secretary of the Revisionist leader Ze’ev Jabotinsky, whose ideology informed the Irgun and other Jewish Zionist terror gangs.

Likud has been running billboards featuring Benny Gantz with Joint List leaders Ayman Odeh and Ahmad Tibi, saying “Yes to a Jewish and democratic state” and “no to terror supporters”.

The real message of it is “yes to racism” and “no to Palestinians”. This blatant racist incitement is being called out by Ayman Odeh, and the refusal to form a government with the Joint List has been condemned here and there, but that attitude, of treating Palestinians as invalid partners, is a very mainstream attitude which basically cuts across the Zionist political spectrum, and has always meant that Palestinians can come into the public sphere as far as voting – but not as far as governing.

Even Dan Meridor, a former Likud minister, wondered about Netanyahu’s dismissal of the Joint List as being “not part of the equation”:

He’s appealing to racists. And it goes against a basic tenet of Zionism: We strove for a Jewish majority in the land. The assumption was, Arabs vote. Otherwise why would you need a majority?

Nice question – if you’re going to effectively enact Apartheid, why the façade of the vote? Precisely because Apartheid needs a veil, if you’re going to play “Jewish and democratic”. Likud Justice Minister Amir Ohana formulated it quite precisely recently:

The Arab voice is equal to a Jew’s when it comes to the Knesset elections, but not the government.

Ayman Odeh of the Joint List called out the racism and hypocrisy of the refusal to join forces with Palestinians, even in these “emergency” times:

There is not a single hospital staff with a Jewish majority. If we can save lives, we can also make decisions,

Odeh was referring to the disproportionate representation of Palestinian citizens in Israel’s hospitals. In his citing of the “Jewish majority”, he was indirectly criticizing also the Blue White rhetoric. Gantz as well as Yair Lapid have been applying this racist rhetoric, which suggests racial purity, more than it actually means “majority”.

And Ahmad Tibi, who is a medical doctor, posted a photo of himself in medical gear at a hospital, with the headline:

So, Netanyahu will exploit the Coronavirus epidemic to incite against Palestinians, while making our eyes wet over all of humanity being in the same boat.

It’s a political numbers game, too. Excluding the Joint List would mean that Netanyahu’s loyalist bloc would have a more decisive majority in the “broad unity government”. And if Gantz rejects that deal? Well, then he’d be seen as a rejectionist in times of national emergency, because you don’t go petty in such times. If he’ll insist that the Joint List are also equal humans, he’ll be advocating for the “terror supporters”.

All humanity is in the same boat, but some are apparently considered less human than others.