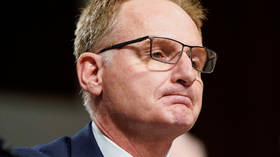 A day after issuing a formal apology for appearing to call the ousted captain of Covid-19-stricken aircraft carrier USS Theodore Roosevelt “too naive or too stupid” for command, acting US Navy Secretary Thomas Modly has resigned.

Modly tendered his resignation on Tuesday, and Defense Secretary Mark Esper accepted it the same afternoon. Modly’s resignation came less than an hour after House Speaker Nancy Pelosi had publicly demanded his removal. Pelosi praised the actions of Captain Brett Crozier, whom Modly had relieved of command over his decision to make public a memo warning of a coronavirus outbreak aboard the ship, and accused Modly of failing to “prioritize the force protection of our troops.”

The captain of the aircraft carrier USS Theodore Roosevelt sent a direct letter to the Pentagon asking for his sailors to be allowed to leave the ship and go into quarantine after over 100 of its crew tested positive for coronavirus. The Pentagon’s response was equally direct: no. US Defense Secretary Mark Esper dismissed the request, saying he’ll deal with the issue through the regular chain of command, despite Captain Brett Crozier suggesting action was needed because 'we are not at war, and therefore cannot allow a single sailor to perish as a result of this pandemic unnecessarily.'

The departing Navy Secretary had excoriated Crozier for allowing the memo to end up in the hands of the media, suggesting in an address to the Theodore Roosevelt’s crew over the weekend that if he hadn’t intended that outcome – which would have been a violation in itself – he was “too naive or too stupid to be a commanding officer of a ship like this.”

Modly slammed the letter, which had pleaded with the Navy to send resources to help 100-plus Covid-19-infected sailors, as a “betrayal of trust,” claiming the news of the virus-soaked ship had deeply disturbed the government of Guam, where the carrier was docked

ALSO ON RT.COMCarrier captain fired over coronavirus letter becomes latest Resistance iconModly will be replaced by Army Undersecretary James McPherson, Esper told reporters on Tuesday, adding that President Donald Trump had approved the appointment. McPherson himself had only been officially sworn in as Army Undersecretary last month after holding the role on an interim basis since July. Modly himself had only held the Acting Secretary post since November, when his predecessor, Richard Spencer, was fired over his handling of the case of Navy SEAL and accused war criminal Eddie Gallagher.

Trump had backed Modly’s decision to fire Crozier, denying last week that the captain was being “punished” for trying to save the lives of the men under his command – a move which immediately made the Navy Secretary a target of the president’s nemeses.

On Monday, Democratic Senators Ted Lieu (California) and Ruben Gallego (Arizona) wrote to Esper, demanding Modly be fired for relieving Crozier of his command “before an investigation was started into all the facts and circumstances” and making “inflammatory comments about a highly decorated commander.”

The USS Theodore Roosevelt is home to some 5,000 sailors and was deployed in the South China Sea before the Covid-19 outbreak forced it to return to harbor. Its crew is being tested for the virus and quarantined in hotels on the US territory.