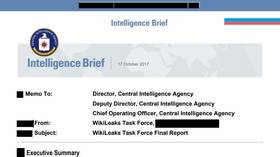 Screenshot of the first page of the CIA WikiLeaks Task Force’s final report
An internal CIA report about the Vault 7 fiasco paints a damning picture of the main US spy agency. WikiLeaks released the CIA’s hacking tools, likely leaked by an insider, while CIA chiefs were too busy cooking up Russiagate.

Vault 7 was the name given to cyber attack tools developed by the CIA’s Center for Cyber Intelligence (CCI), and published by WikiLeaks in March 2017. It was the largest data breach in Langley’s history, with long-lasting consequences. For example, Chinese cybersecurity companies recently used Vault 7 evidence to show that the US has been hacking China for over a decade.

ALSO ON RT.COMCIA has been hacking China for 11 YEARS, says Chinese cybersecurity firm citing Vault 7 leakAccording to a just-released internal CIA report, “CCI had prioritized building cyber weapons at the expense of securing their own systems. Day-to-day security practices had become woefully lax.”

“Most of our sensitive cyber weapons were not compartmented, users shared systems administrator-level passwords, there were no effective removable media controls, and historical data was available to users indefinitely,” the report goes on to say.

The heavily-redacted document actually dates back to October 2017 and was only made public Tuesday by Senator Ron Wyden (D-Oregon), in an effort to pressure the new Director of National Intelligence John Ratcliffe into imposing new security measures. While the CIA ineptitude is the obvious takeaway, no one seems to have noticed the real bombshell: the timing of the breach and its implications.

The report says the CIA “did not realize the loss had occurred until a year later, when WikiLeaks publicly announced it in March 2017.” Now, what all was happening between March 2016 and a year later? You guessed it: Russiagate!

Even as his own cyber arsenal was getting swiped from under his very nose, CIA chief John Brennan was obsessing about “Russian hackers” of the Democratic National Committee, or Hillary Clinton’s emails, or something – and pushing the bogus ‘Steele Dossier’ alleging Donald Trump’s collusion with Russia, which eventually made it into the infamous ‘Intelligence Community Assessment’ that accused Moscow of meddling in the 2016 US presidential election.

ALSO ON RT.COMWe want to believe: ‘Russian hacking’ memo REVEALS how US intel pinned leaks to KremlinIt gets worse. According to the report, “Had the data been stolen for the benefit of a state adversary and not published, we might still be unaware of the loss—as would be true for the vast majority of data on Agency mission systems.”

So if the mythic bogeymen ‘Russian hackers’ had actually wanted to harm the US, they could have just used the CIA’s own, unprotected cyberweapons to stage false flags and wreak havoc across the world? None of which happened, obviously. Yet Brennan and his confederates have been telling everyone for years that the Kremlins wanted to “hack our democracy” by publishing some Democrat emails and posting memes on social media! 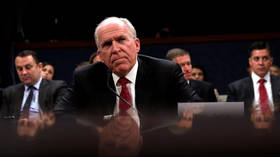 Note that Mike Pompeo, who took over at Langley before he moved to Foggy Bottom, bought into Brennan’s fable hook, line and sinker, denouncing WikiLeaks as a “hostile intelligence service” and a “cut-out” for Russia in April 2017.

In an irony of ironies, the Trump administration – run by a man who denounced the Iraq war and was falsely accused of working with WikiLeaks and Russia to get elected – is now seeking extradition of Julian Assange from the UK on trumped-up hacking charges related to the 2010 WikiLeaks revelations of US atrocities in Iraq.

ALSO ON RT.COMAssange trial rehearsal? Hung jury results in mistrial for former CIA tech accused of handing ‘Vault 7’ docs to WikiLeaksAs for how Vault 7 got to WikiLeaks, the jury is still out on that. Joshua Schulte, the employee charged with leaking the files, is being prosecuted again after a hung jury at his first trial in March. His lawyers have argued the CIA security was so lax, anyone else on the team, or even outsiders, could have done it.

The next time the media report some incendiary claim based on US intelligence “assessments,” try to keep all this in mind.