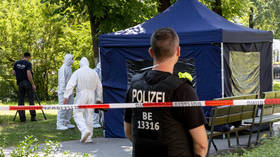 A “brutal murderer” was roaming through Europe despite being wanted for terrorism by Moscow, Russian President Vladimir Putin said while urging for better international cooperation against extremists.

“We see how such people [like this terrorist] are freely roaming the European capitals,” Putin told reporters at a Q&A event in Moscow on Thursday.

He was responding to a question about a Georgian national of Chechen origin who was assassinated in Berlin in August. German media identified him as Zelimkhan Khangoshvili, or Tornike K as the German authorities officially refer to him.

And what will happen if people who are currently sitting in [prison] camps [for terrorists in Syria] come to you? Would you like that? Would allow them to freely walk in your cities too?

ALSO ON RT.COMGeorgian killed in Berlin was a murderer & terrorist, but ‘I don’t know what happened to him’ – PutinPutin said there should be comprehensive cooperation between Moscow and Western states on tackling extremists. He reminded everyone that Moscow alerted the US about Tamerlan and Dzhokhar Tsarnaev before the brothers bombed the Boston Marathon in 2013.

We requested for them to be extradited [to Russia] and said they were dangerous. We were then simply ignored… And here you had criminals like that strolling through Berlin.”

The RFE/RL reported that Tornike K had in the early 2000s fought alongside ruthless Islamist warlords in Chechnya who masterminded numerous terrorist attacks on Russian soil. Putin later confirmed this, saying that the man was wanted for a terrorist attack in the Moscow metro.

ALSO ON RT.COM‘Expulsion of Russian diplomats over Berlin murder case suits trend of blaming Moscow for everything, whether it’s true or not’Earlier this month, Germany expelled two Russian diplomats after accusing Moscow of not cooperating enough with the probe into Khangoshvili’s murder and saying that there is evidence that the assassination was ordered by the authorities in Russia or Russia’s region of Chechnya. Russia retaliated by expelling two German diplomats, and blasted the move as hostile, denying any ties to the murder.