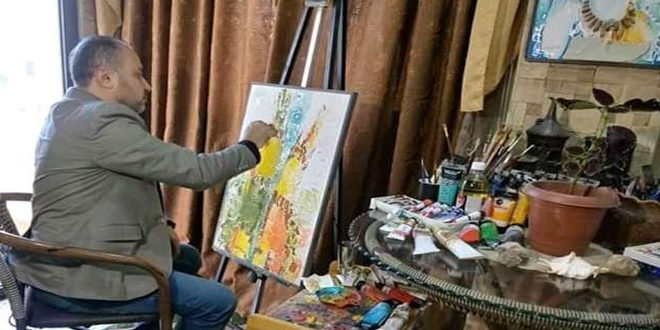 Damascus, SANA_ Plastic artist Dr. Ghatfan Habib considers art as a global message that exceeds the limits of language, transmits creative human thought in a visual way that reaches the mind of the recipient wherever he/she is. It deals with human issues and touches his pain and hopes with calligraphy and color.

” Plastic art is a way to exit from the difficult reality into a more spacious and comprehensive space that the artist can formulate in a brighter way”. he said.

As for his artistic work, “The Syrian New Year”, which coincides with the first of April, Ghatfan explained that it is one of a group of works he implemented in the last stage using natural stone, acrylic and earthy colors on the canvas, “a special material for paintings”, which in general sheds light on important events of our ancient history, specifically from the civilizations of Mesopotamia and Syria.

Most of his paintings that deal with the subject of women show the strong eastern female, the leader and the queen that bears the features of Syria and the East, were implemented by the technology of natural stone extracted from the land, according to Ghatfan.

Ghatfan, through his works, adopts Aristotle’s saying that “the job of art is not to present the external form of things but to address its internal connotation, for real and original art in his opinion, is the ability to signify with color and technology and to reformulate the form with a metaphysical symbol that includes culture and knowledge.

He clarified that the plastic movement in Syria has accelerated recently, despite the circumstances our country has gone through, as this stage has produced an art that emphasized, in a way, the resistance and the refusal of death and the desire for life through which the Syrian artists prove that their country is still the heart of the world.

“Despite all the devastation that has affected our monuments and historical ruins because of terrorism, the potential for renewal and resurgence which is inherent in the spirit of every Syrian artist can restore all that has been ruined.” Ghatfan concluded.