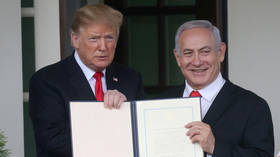 File photo: Donald Trump and Benjamin Netanyahu hold up a proclamation recognising Israel’s sovereignty over the Golan Heights on March 25, 2019. © Reuters / Leah Millis
The Trump administration has released a controversial new US government map of Israel that shows the Golan Heights in Syria as being part of Israel, much to the outrage of many online.

Special envoy to the Middle East, Jason Greenblatt, shared the updated map on Twitter on Tuesday. Israel occupied the Syrian region in the 1967 Six Day War and later annexed it in 1981 in a move that was not recognised by the international community or the UN Security Council.

Welcome to the newest addition of our international maps system after @POTUS issued a proclamation recognizing Israeli sovereignty over the Golan Heights pic.twitter.com/1D0GTdwtix

.@APDiploWriter: Following the Golan announcement @POTUS instructed all agencies to take action to implement his decision. It’s a large process to update everything. The USG is working on this but it takes time. As the saying goes, “Rome wasn’t built in a day.” https://t.co/H0UznOYQg9

President Donald Trump announced he was recognising the Golan Heights as being part of Israel late last month, in the run up to Israel’s election in April.

ALSO ON RT.COMTrump signs declaration recognising Israel’s sovereignty over disputed Golan HeightsGreenblatt tweeted that Trump had “instructed all agencies to take action to implement his decision. It’s a large process to update everything.”

You celebrate breaking international law yet many criticize you for showing the West Bank as a separate entity. Conclusion: you can’t please the hard liners and loosing your moral compass trying will certainly cloud your legacy.

This coming from people who pretend to have the ultimate peace deal… nothing else but continuous unilateral blatant support for Israel at the expense of any prospect of peace . But the world is full of other world maps that show a different story https://t.co/6nEZYMMRdo

While you’re at it, might as well share the map you’ll issue after Trump recognises the incoming Israeli government’s annexations in West Bank. Or do you have to wait for Bibi to send it to you? https://t.co/WyIK476ZNm

The controversial move was met with criticism from the international community, which does not recognise Israel’s claim to the region, while Israel President Benjamin Netanyahu and others hailed the decision.

The updated map still refers to the West Bank as being “Israeli occupied with current status subject to the Israeli-Palestinian Interim Agreement; permanent status to be determined through future negotiations,” despite Netanyahu’s recent promise to impose Israeli sovereignty across West Bank settlements.

About 40,000 people live in the Golan, half are Druze and Alawites, and half are Jewish settlers.

I just recognized California and Arizona as part of Mexico 😂 what a dose of idiots pic.twitter.com/qng1vXOPnl

Unlawful & unrecognised in International Law. Illegally annexed #GolanHeights never was & never will be a part of #Israel.