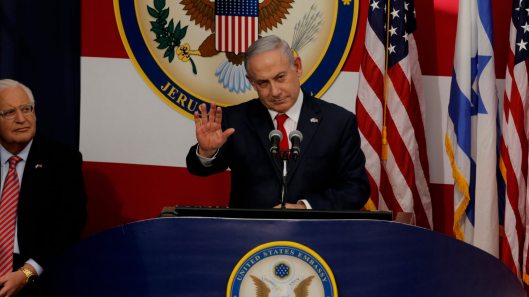 The massive funding for Israel’s military is the result of the 2016 U.S.-Israel Memorandum of Understanding on security assistance between the Israeli and U.S. governments, which called for annual funding of $3.8 billion — or $23,000 per year for every Jewish family living in Israel — for the next 10 years.

WASHINGTON — In an event largely overlooked by the U.S. media, the Senate passed a bill on Wednesday that would provide Israel with $3.3 billion in military aid along with over $500 million for missile defence over the course of the next year. The bill, officially titled the “United States-Israel Security Assistance Authorisation Act of 2018,” is expected to be voted on by the House within the week. If approved and signed into law by President Trump, it would represent the “single largest military aid package in American history.”

The massive amount of funding being allocated to Israel’s military is ultimately the result of the 2016 U.S.-Israel Memorandum of Understanding on security assistance between the Israeli and U.S. governments, which called for $3.8 billion in funding for Israel on an annual basis over the next ten years.

Though this startling figure — which translates into $23,000 for every Jewish family living in Israel — was supposed to be the limit for U.S. military aid to Israel, the figure is actually set to be higher this year, given Congress’ recent passage of a massive $716 billion defence bill that provides an additional $550 million in U.S. aid for Israeli missile defence systems. The defence bill also authorises an additional $1 billion for U.S. weapons stockpiles in Israel.

Over the past several years, U.S. military aid to Israel has ballooned, with U.S. funding of Israeli missile defence alone quadrupling since 2009. Ironically, many of those missile defence systems, besides being clumsy and costly, frequently malfunction, including the “Iron Dome” defence system — jointly developed by Raytheon and Israeli defence company Rafael — and the “Arrow-3” system — jointly developed by Israel Aerospace Industries and Boeing.

The massive amount of aid the U.S. government is set to give to Israel comes during Israel’s unprecedented crackdown on unarmed protesters and a looming Israeli military operation aimed at “conquering” the Palestinian enclave. Indeed, since March 30, the Israel Defence Forces (IDF) — the very forces set to receive billions in U.S. taxpayer funding — have killed 164 Palestinians, including 26 children as well as journalists and medics.

In addition, over that same time frame, the IDF has injured upwards of 17,000 Palestinians living in Gaza, over half of whom had to be hospitalised for their injuries — including more than 1,400 children. All of those killed and injured were unarmed. In contrast, there has been a single Israeli death and nine Israeli injuries over that same time period.

Such grave violations of human rights would normally prevent the U.S. government from providing aid to Israel, given that the Leahy Laws enable the U.S. to withhold military assistance from units and individuals in foreign security forces if they have committed a gross violation of human rights (GVHR). GVHR offences include: extrajudicial killings; torture or cruel, inhuman, or degrading treatment or punishment; prolonged detention without charges and trial; causing the disappearance of persons by the abduction and clandestine detention of those persons; and other flagrant denials of the right to life, liberty, or the security of person.

However, given that Israel has been engaged in gross violations of human rights since its founding in 1948, and yet has received over $133 billion in aid from the U.S. during that time, the U.S. government has made it clear time and again that it is willing to bend the rules when it comes to Israel.

Whitney Webb is a staff writer for MintPress News and a contributor to Ben Swann’s Truth in Media. Her work has appeared on Global Research, the Ron Paul Institute and 21st Century Wire, among others. She has also made radio and TV appearances on RT and Sputnik. She currently lives with her family in southern Chile.